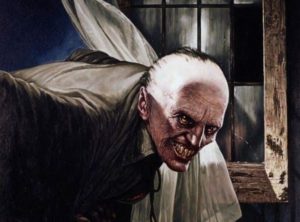 The vampire story dates from just after the English Civil War (1650s). The owners of Croglin Low Hall were a family called Fisher and the story was told to one Augustus Hare by a descendent of the family in 1896.

For some reason of their own, the Fishers decided to go and live in the south of England and rent out the farm. The tenants they found were two brothers and a sister called Cranswell. The new family stayed in their remote farmhouse through the first winter without event.

The summer came and, that year, it was stiflingly hot so they slept with the windows open. At that time the Hall was only one storey high – the upstairs has been built subsequently. Near the Hall was a chapel and a small graveyard which once belonged to the Howard family – great landowners in these parts.

One particular airless summer night the men sat with their sister watching the moon rise. After a time they decided to go to bed. The sister lay in her bed, the bedclothes cast off because of the heat.

She had closed her window, but not fastened the shutters. She gazed out of her window, propped up on her pillows as the long summer day faded out and night took its place. In Cumbria at midsummer, because it is quite far north, it does not get very dark at all between sunset and sunrise.

Miss Cranswell soon became aware of two lights in the belt of trees some distance from the house which separated the lawn from the graveyard. She watched and, after a while, she made out a dark shape moving towards the house – towards her window. A terrible horror seized her.

She wanted to get up and leave the room, but to go to the door would have meant she had to go closer to the window. Besides she had locked the door from the inside and so would have to stand there and unlock it – all the while clearly visible to whatever was out there.

Frozen to the spot, she stared at the shape but then it turned and instead of moving closer to her window, it started to move around the house. She jumped up and ran towards the door. Her hands were shaking so much that she found it hard to turn the key.

And then her heart nearly stopped. Behind her – close to her though she didn?t dare look – she heard a scratching at the window. It was outside. Just feet away. She stood there petrified with fear still not turning her head.

Then she heard the sound of it unpicking the lead which held the glass in place. She forced herself to look and saw that one pane of the mullioned glass had come away and a long bony hand stretched in and turned the window catch.

Whatever it was, it came in through the window with a rush and grabbed her – its fingers in her hair, its mouth at her throat. It bit her neck and forced her onto the ground. As it bit her she screamed.

Her brothers heard the noise and came and battered at the locked door. The creature looked up and as the door was broken open, then it turned and fled out of the window, leaving her lying on the floor, bleeding profusely from a wound at her neck.

One brother clambered out of the window and went after it. But it was fast and before he could catch it – perhaps it was lucky for him that he didn?t – it disappeared into the inky blackness around the graveyard.

Trying to explain it afterwards, the girl rationalised that the creature must have been a dangerous lunatic. But she was still horribly shocked and her brothers took her away from Croglin to recover – over to the Continent.

They stayed away for a while, but then, as autumn came, it was she who urged them to return to Croglin. They had paid for the tenancy, and besides, she joked, it would be very bad luck to come across two escaped lunatics.

They returned to Croglin and spent the winter there. She had the same room, but always closed the wooden shutters. The brothers took to carrying loaded pistols with them around the house. But nothing happened until one night in March.

The sister was lying in bed when she heard a terribly familiar scratching at the window. She struggled to get fully awake and scrabbled for a candle and something to light it with. When she got a flame she saw that the shutters were opened.

Staring in at her was a brown shrivelled face and she saw its long bony hands picking at the lead of the windows. This time she screamed immediately. Her brothers rushed in with their pistols.

She pointed to the window, but the creature had gone. The brothers ran out of the front door and saw it moving across the lawn towards the graveyard. They fired and one of them hit it in the leg. It scrambled away into the darkness and they lost it.

The next day the brothers summoned their neighbours, and with their help they went into the graveyard. The tenants of nearby Croglin High Hall had also been suffering visits from it and their young daughter had bite wounds at the throat.

The father had thought that she had been bitten by a rat, but when the Cranswells said what had happened to their sister, they feared the worst and the father joined the party as it made its way to the graveyard.

One of the locals had heard rumours of a particular vault being home to some monster so they opened it up. They stood around, pistols and other weapons at the ready. The vault was full of coffins but most were smashed and the remains mangled and strewn across the floor. Only one coffin was undisturbed.

They lifted the lid and there they saw the mummified and shrivelled figure that had moved as if alive the night before. To confirm what they feared they looked at the leg and found a recent wound from a pistol ball. There and then they set fire to the dry coffin and burnt the vampire in it.