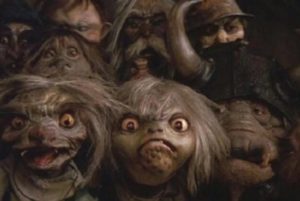 Some would rather let elves live in the fantastical world of Middle Earth and Tolkien’s imagination or in the holiday dreams of children imagining Santa’s little helpers. But do these magical little people have any bearing in reality?

Legends of dwarves, elves, and faeries are found worldwide. There are the famed trolls of Scandinavian folklore, the wealthy leprechauns of Irish lore, and other mischievous elves who mainly live in (fiction) literature, but numerous sightings are actually reported by surprised individuals throughout the world. Native Americans of the United States and Canada have similar legends as well.

The majority of “evidence” of these miniature humanoid beings are the numerous eye-witness testimonies. Encounters with elf-entities usually occur when the elf approaches a home and requests food or shelter. If the resident refuses to comply with the elf’s demands, they would bring misfortune upon the greedy person. Unless harrassed, elves are said to generally avoid contact with humans. The majority of elven legends throughout the world confine these beings to the deep forest, where they lead a reclusive, mysterious life.

Although the sworn testimonies of those who claim to have encountered elves on occasion or spotted them in the forest are easy to dismiss as fantasy or hallucination, scientific, archaeological discoveries cause one to think twice…at least for a minute or two.

In 1932, a 14-inch tall mummy was found by gold prospectors in the Pedro Mountains 60 miles southwest of Casper, Wyoming (USA). The tiny mummy was found sitting on a ledge in a small granite cave. Its legs were crossed and arms folded on its lap. It had a flat nose, low forehead, and a broad, thin-lipped mouth. The mummy was x-rayed and analysed. The Anthropology Department of Harvard University certified the mummy as genuine and believed by some to be of a 65-year old man.

A more skeptical Dr. George Gill speculated that the mummy could have been an infant afflicted with anencephaly, a congenital abnormality which causes tiny adult proportions. Since its discovery, the mummy changed hands several times and, unfortunately, disappeared.

It is interesting to note that Shoshone and Crow natives that inhabited the area where the mummy was found had legends of “little people” in their ancient folklore.

Perhaps the most spectacular and baffling find was in the later 1800s. Hundreds of tiny flint tools were found in the Pennine hills of east Lancashire, all of which were no larger than half an inch long. The tiny tools included scrapers, borers, and crescent shaped knives. The craftsmanship of such tools were extremely fine, and in many cases, a magnifying glass needed to be used to detect the evidence of flaking used to bring them to a sharp point. None of these tiny tools were practical for perfoming the tasks that the regular sized ones were intended for. Because of this, some speculated they were ritualistic replicas…but why, and why so small? Were these tools made by similarly small people?

As with the elf legends, tiny tools similar to the ones found in Lancashire have been found worldwide including Devon and Suffolk, England, Egypt, Africa, Australia, France, Italy, and India.

It would seem that if elves did/do exist, more evidence or contact with these strange miniature people would be collected or reported. However, if giant 6-8 foot tall bipedal hominids such as Sasquatch and Yeti can keep their existence unknown, how much easier it would be for elves to do the same, being just inches tall?