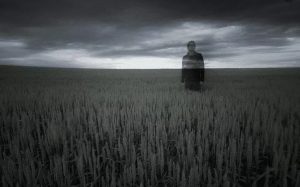 Orion Williamson was sitting on the front porch of his Selma Alabama farmhouse with his wife and child in July 1854. He told his wife he was going to his pastured horses into the barn’s shade.

As he walked to the field, Orion picked up a stick and waved it back and forth. Suddenly, he disappeared. Mr. Wren and his son , riding in their horse drawn carriage, also saw him vanish.

They rushed to the site where Orion disappeared and noticed most of the grass was missing.

After Orion vanished, the Wrens ran to the field where Mrs. Williamson and her child were. They searched the area for two hours and found nothing.

Mrs. Williamson collapsed in shock when the reality of what happened struck her. She was taken to a hospital for treatment. When news spread about the incredible incident, three hundred townsmen formed a search party.

The men formed three rows, holding each others’ hands, and moved across the field slowly, inch by inch, stopping every several feet to search for holes. They scoured the field many times and continued into the night, using torches and lanterns.

Bloodhounds joined the search. Nothing was found. The following morning, more volunteers and a team of geologists arrived. They started digging where Orion disappeared, but found solid rock a few feet beneath the ground.

There were no cave-ins, openings or crevices or holes to explain the mystery.

A bizarre circle, with dead grass inside, appeared the following spring where Orion vanished. Mrs. Williamson was still traumatized by her husband’s disappearance and reluctant to talk about him and what had happened.

After the incident, she and her child heard Williamson’s voice calling for help. They rushed to the site every time they heard him, but nothing was there. The voice continued for several weeks, becoming weaker and weaker. One night, they heard whispers, then heard his voice no more.

Wren testified in the case about Williamson’s estate. He saw the planter vanish and Mrs. Williamson run down the walkway, screaming that her husband was gone.

James corroborated his father’s testimony. No worker in the field where Williamson was going to saw him. An extensive search failed to find the man or give a clue about what happened.

The judge declared him dead.

Scientist Dr. Maximilian Hern wrote Disappearance and Theory Thereof. He stated Orion walked into an empty spot of ether. These places lasted for a few seconds and could destroy all matter within them.

Another scientist said he believed Orion walked into a magnetic field that disintegrated his atomic structure, sending him into another dimension.

Interesting, but Orion’s incident provided the basis for people writing stories about vanishing men. McHatten, a traveling salesman, was stranded by a snowstorm in Gallatin, Tennessee.

He was bored and decided to rewrite the Orion account and sell it as a true report. The name was changed to David Lang, the place to Gallatin and the date to 1880.

Although McHatten’s story, except for the basic facts, is fiction, it has appeared in reputable journals and books by authors who didn’t do their research. It’s ironic that the Lang tale is better known than the genuine case it was based on.