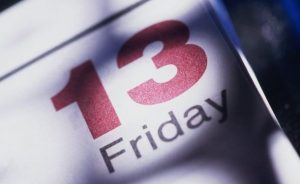 For those out there who are not superstitious, Friday the 13th probably isn’t anything more than a successful Hollywood franchise. However, before the creative minds behind the films and television series put fear on the big and little screen, Friday the 13th was a part of folklore discussion.

History of Friday the 13th Superstition

For many, superstitions are merely a source of humor. However, there are people who not only fear the day Friday the 13th (known as paraskevidekatriaphobia) but who fear the number thirteen (called triskaidekaphobia).

But whatever someone’s take on the day, there is some controversy as to how the fear surrounding Friday the 13th and the belief that the day is unlucky began.

According to those in the know, Friday has a history of being an unlucky day from Christian tradition which tells that the crucifixion of Jesus and Eve offering the apple to Adam, among other events, occurred on a Friday while even Chaucer during the 14th century alluded to Friday as a bad day in The Canterbury Tales.

Other tales of disaster include the falling of the Knights of Templar on Friday, October 13, 1307, and even in more contemporary time disasters such as stock market crashes and the landing of Hurricane Charley in Florida (August 13, 2004) have occurred on a Friday.

There is even the belief that 13 people at the dinner table, as in the Last Supper, will result in the death of one of the diners. Travelers may note that many hotels don’t have a 13th floor or room and many cities avoid using a 13th street or avenue.

Interestingly enough, what most of the experts have come to agree on is that as amazing as the history of the day and number are, this superstition – believing Friday the13th as unlucky – wasn’t found prior to the 20th century.

Friday and Thirteen are Not Always Unlucky

Even though Friday the 13th is associated with unlucky events, there are some things about Friday and 13 and Friday the 13th that are not so unlucky. Consider these 10 ideas:

– Children enter teen-hood at the age of 13.
– Bar Mitzvahs occur at the age of 13.
– The Egyptians believe that life occurs in 12 stages with 13 being ascension into heaven.
– The astronauts of Apollo 13 made it home safely after facing potential disaster.
– For many people, Friday is pay day.
– Friday, thirteen or otherwise, is the end of the work week for many people.

– Babies are born on Friday the 13th.
– In numerology, the number 13 signifies change.
– The Friday the 13th movie franchise has made some lucky people a bunch of money.
– Finally, no matter what else, the world keeps spinning even though it is Friday the 13th.

So for all those who are superstitious or find themselves feeling uneasy on Friday the 13th, keep in mind the good things and be happy to see another day – Friday the 13th or otherwise.