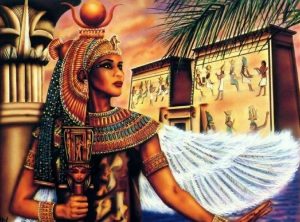 Ancient Egyptian zodiac signs are based mainly on gods and goddesses.

The Sphinx is a mythical creature with the body of a lion and the head of a human. It still evokes mystery today!

You may or may not come across as mysterious, but you certainly do enjoy figuring things out for yourself. You are an investigator. Nothing gets past you!

Shu is one of the first known gods. He is the god of air and light.

You are creative. Everything you touch turns to gold, but you doubt your abilities. You often end up letting those golden opportunities pass you by. Develop your confidence!

The ancient Egyptians knew her as Auset or Aset, but Isis is the goddess of nature and magic. She was worshipped as the perfect wife and mother.

Your goal is to speak your truth, and you often shoot from the hip. Using both intuition and logic, you try to make sense of things. If not, you always have your sense of humor to fall back on.

Osiris is the husband and brother of Isis. He is known as the god of the afterlife, but he also brought law and agriculture to the ancient Egyptians.

You have a deep-seated need to do the right thing. Sometimes, however, this can cause you to procrastinate. Don’t worry; your heart is always in the right place.

Amun or Amon-Ra is considered to be a creator god as well as the Sun God.

You have the capability to be a great leader. You are intelligent and able to look at the bright side of life. Watch out for a tendency towards stubbornness, however.

Hathor was a very popular goddess in ancient Egypt. She had many roles including goddess of fertility, love, music, beauty, and dance.

You are a hopeless romantic. You wear your heart on your sleeve and have no trouble letting others know how you feel. Extroverted and charming, you always put others at ease.

The phoenix was often connected with Ra, the Sun God. This mythical bird was believed to die and resurrect itself.

You are one of those people who can always make lemonade out of lemons. You rise to overcome any challenge set before you, but don’t isolate yourself. Allow others to help you.

Anubis is the god of the underworld, often depicted as a man with a dog’s head. He is known as a judge of souls, weighing one’s heart against a feather to see if he or she is worthy of immortality.

You are thoughtful and philosophical. Not afraid to explore the dark side of life, you seek to understand it so that you can help others. You are determined and compassionate.

Thoth is the god of wisdom and knowledge, often shown with the head of an ibis bird. He invented writing and served as scribe and advisor to the gods.

You are a problem solver. With a keen intellect and creative flair, you not only come up with great solutions, you teach others to do so as well.

Horus, often depicted as a man with a falcon head, is the god of vengeance, war, protection, as well as the sky.

You are a diligent worker. Some may accuse you of being a workaholic. Not only are you motivated, you are unafraid to take risks. Despite your work dedication, family always comes first.

Wadjet is a woman often shown with a cobra head. She is the patron goddess of pharaohs, children, and women in labor.

You are calm, cool and collected. You tend to be a perfectionist and want to do things right the first time. You are a traditionalist and have strong family values.

Sekhmet is known as the goddess of war and healing and is usually depicted as a woman with the head of a lioness.

You have very high standards for yourself and others, which sometimes leads to moments of impatience. Regardless, you still have a great deal of faith and optimism in people.

Discover the Meaning of Your Name Using Vedic Numerology