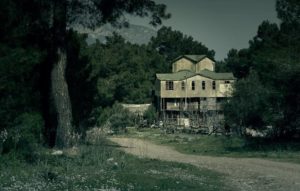 Robert Young had considered buying another home for some time, so when he heard about a house with several acres of land and a great price, he had to take a look. The house was located on Route 76, not far from Austintown, Ohio. Robert immediately contacted the listing agent for the property and scheduled an appointment to view the home the next day. Robert then called his son, Douglas, to ask if he would like to go along and see the property. The two agreed and planed to meet the next morning at Douglas’ grandmother’s house. From their, the father and son would drive together to meet with the real estate agent.

Robert and Douglas met the next morning at 5:00 and after a couple of cups of coffee, got into Robert’s car and left the grandmother’s home at about 5:30. The home the two were going to see was not far away and the men arrived at the property at 5:50. Being early, the agent had not yet arrived so the two parked in front of the garage and decided to look around on their own. The property appeared to have been abandoned, the lawn having not been cut for a very long time. Nevertheless, the property appeared to be worth far more than the asking price.

As the two men stood by their car they heard the sound of children laughing. The men walked towards the back of the house where the children seemed to be. Just as the father and son reached the rear corner of the house the sound of laughter stopped. In the back yard was a swing set, two of the swings were moving as if children had just jumped off of them. Robert and Douglas glanced at each other, then back to the swings, they were now motionless and everything around them was totally silent.

As strange as the sounds of phantom children were it was just the beginning. The men walked to the nearby garage, the door was locked but looking through the window they could see that it was empty and had a dirt floor. Robert and Douglas then moved on to the house, to their surprise, the door was unlocked. The house had no windows on the first floor except the small windows in the front door. The inside of the home was very dark and as they found out, none of the lights worked. Robert tried the door to the basement, it was locked. Douglas was standing at the bottom of the stairs leading to the second floor, he decided not to go upstairs.

Just seconds later Robert said “I think I’ll try this door.” The door he was referring to was the basement door which he had tried and found locked just moments earlier. To Douglas, it seemed to be a replay of what had just happened. This time was different however, as Douglas watched his father turn the door handle, the door opened. Not only was the door no longer locked, the light switch at the top of the basement steps worked, the only lights in the house that did.

The two men slowly descended the stairs and found the basement to be empty, except for a very old washing machine and a large handgun which was lying on top of it. Douglas, who was familiar with guns slowly picked up the revolver, from the weight he knew that it was loaded. Just as he began to look at the weapon the lights went out, the basement door slammed shut, and the men were in total darkness.

Grasping in the blackness, the father and son quickly found the bottom of the steps. Robert led the way up the stairs with Douglas right behind. When Robert reached the top step he let out what Douglas described as “a terrifying scream.” Robert froze in place and it was left to Douglas to push his father through the door and back to the first floor of the house.

The men ran from the home and safely reached their car. After a moment to try to calm themselves, Robert started the car and turned on the headlights. The car lights revealed yet another horror. The garage door which had been closed and locked, was now open. Inside the garage was a lamb, its throat had been cut but it was still alive as the blood ran onto the dirt floor.

When Robert and Douglas arrived back at the grandmother’s house, she was waiting for them. She was worried because they had been gone so long. They had left at 5:30 in the morning, they returned at 2:30 the following morning, 21 hours after they left. Neither man had any explanation for what had happened to them. In fact, Robert never spoke about the events for the rest of his life. Douglas said he eventually stopped mentioning the bizarre incident because his father would physically shake if the subject was raised.