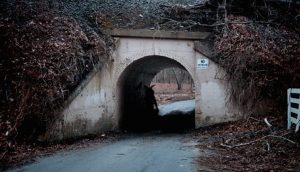 On Colchester Road in Fairfax County, Virginia, just outside the small town of Clifton, is a site known officially as Colchester Overpass, but more well known by its unofficial name of Bunny Man Bridge.

To all intents and purposes, there’s nothing remarkable about the site, which consists of a one-lane concrete tunnel beneath a railroad track, but it has become the origin of a well known urban legend all the same.

It is said that when Fairfax County, in Virginia began to become more populated it was decided to build an insane asylum there. However, no one wanted to live near the asylum and because of the public outrage, the institution was eventually shut down in 1904.

During the transfer of inmates to a new facility, one of the buses transporting them crashed and most, including the driver, were killed, but ten inmates survived and subsequently escaped. Search parties found all but two of them pretty quickly, with the exception of Marcus Wallster and Douglas Grifon. Grifon having been institutionalized for killing his family and children on Easter Sunday.

During this time, locals began to find hundreds of cleanly skinned, half-eaten carcasses of rabbits hanging from the trees in the surrounding areas. Another search of the area was ordered, and the trail led deep into the woods to a tunnel bridge crossing where the police located the remains of Marcus Wallster, left in a similar fashion to the rabbits, hanging in the entrance to the tunnel below.

Officials named the last missing inmate, Douglas Grifon, as their suspect and started to call him “the bunny man”.

Grifon was eventually located, but, during their attempt to apprehend him at the overpass, he almost managed to escape before being hit by an oncoming train where the original transport crashed. They say after the train passed, the police heard laughter coming from the site.

Ever since, locals claim to see rabbit carcasses hanging from the Colchester Overpass. Some have even claimed to see a figure standing there in the shadows. Nobody ventures beneath the Underpass to see who it is though because the Bunnyman makes no distinction between rabbits and people.

The legend says that curious visitors to the tunnel end up with their mutilated corpses dangling from the Colchester Overpass like Marcus Wallster so many years before.

The legend goes on to say that if you walk all the way down the tunnel at around midnight the Bunny Man will grab you and hang you from the entrance of the bridge.

It is also said that there was a young man from Clifton, Virginia who came upon the Bridge while traveling. Some time later, he killed his parents and dragged their bodies into the woods to hang them from the bridge and then killed himself.

The legends regarding the site don’t end there either, it is also said that in 1943, three teenagers, two men and a young woman, were at the bunny man bridge for Halloween night.

The three youths were found dead, hung from the bridge with their bodies skinned and slashed open, and it also said that in 2001, after hearing the tale, six local students and a guide searched the area. They found mutilated bunny parts during their search and left the forest after they heard noises and saw figures moving around in the woods.