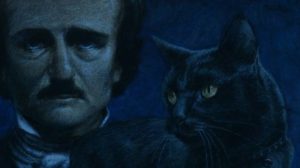 Edgar Allen Poe wrote his first and only full length novel in 1838. Poe wrote the book in a “based on a true story style,” as it turned out, what Poe described was the accurate report of a true event, it simply had not happened at the time Poe penned it. The title of the work was “The Narrative of Arthur Gordon Pym of Nantucket”.

In the Pym story, Poe tells of a ship that was lost at sea. With all on board having given up hope of being rescued and with no food left on board, It was decided that one of the crew would have to be killed to provide food for the others. The sacrificial lamb was chosen by drawing lots, it was cabin boy Richard Parker. Parker was then devoured, with respect, by the crew.

It was in 1884, that the story that Poe had drafted so carefully became all to real. The ship was named “Mignonette” and it was lost at sea, without hope or food. Just as in Poe’s story of Arthur Gordon Pym, the men decided to draw lots to choose their “survival rations”. As it turned out, the chosen one was the cabin boy on the Mignonette, a seventeen year old named, Richard Parker.