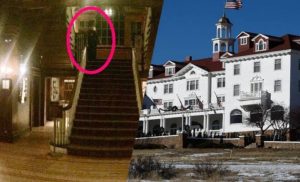 There are more than a few old hotels well known for their haunting, but this one is special. Buried away and secluded in the hills of Colorado there is a grand hotel more than a hundred years old where they play an uncut R-rated version of Stanley Kubrick’s “The Shining” 24 hours a day, 7 days a week, back to back.

They do this, because the movie is not all that far from the truth. Welcome to the Stanley Hotel…

In the winter of 1975 the author Stephen King and his wife spent two weeks in room 217 at the hotel, and within the first few days of their visit his wife, Tabitha, began to witness strange occurrences in their room and in the hallway it was attached to. The most notable of these are the sounds of two girls laughing and playing in the hallway.

In the days that followed, King began on the work that would define him as a preeminent author in the horror genre: The Shining – which featured a fictional haunted hotel known as the Overlook Hotel.

What of the ghosts and hauntings? Is there anything special about room 217 in the Stanley Hotel? King and his wife weren’t the only people to witness paranormal activity at the hotel, in fact numerous witnesses (many in groups) have reported strange phenomenon in rooms 407, 418, 1211, and 1302, as well as the concert hall, the billiards room, and the music room.

Many guests of the Stanley Hotel have also asked to switch rooms after encountering unexplained symptoms of claustrophobia and panic in rooms 1211, and 407 – symptoms that are commonly experienced in most, if not all haunted locations.

Room 1211 in the Stanley Hotel has received the most press as a number of photographs have been taken within the room which appear to have captured an apparition on film, but the most famous of these images is the photo of a young boy peering out of the window. When “Haunted Places in America” contacted the management of the Stanley Hotel to inquire as to whether or not there was a boy in the room, they received the following quote:

“The room number is 1211. Last Friday, there was a single man checked in that room who was part of a business conference. That doesn’t mean he didn’t have a child with him, but it is unlikely that he did.”

Room 407 in the Stanley Hotel is home to one of the creepier apparitions in the hotel, and perhaps the only ghost exhibiting any form of malicious behaviour. It is believed to be the ghost of Lord Dunraven, who had owned the land prior to the hotel’s founder, F.O. Stanley.

He often appears at the window, but once spotted will dash into the rooms closet where he vanishes. He has also been known to move objects within the room, in some occasions violently.

The Stanley Hotel has had its fair share of amateur ghost hunters as well as reality television shows, and formal investigative societies.

The Syfy network’s “Ghost Hunters” show visited the location, wherein they experienced a number of events all fitting just the kind of silliness you would expect from a reality television show, and none of which in any way were similar to reports made by the numerous other witnesses throughout the years.

The Rocky Mountain Paranormal Research Society (RMPRS) followed up on the claims made by the Syfy Ghost Hunters, but having only looked for the same phenomenon shown by the “Ghost Hunters”, they determined that the hotel was not haunted as none of the ghost hunters’ claims could be verified.

In short, there has not been to date a complete and unbiased study of the happenings at the Stanley Hotel, but the number of witnesses grows each and every year.