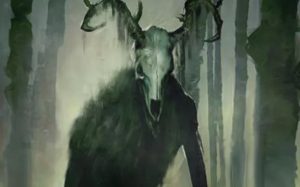 Imagine, if you will, walking alone amongst towering oaks and maples. You’re on the path which leads to the safe confines of your home some distance away, when you hear a commotion behind you.

Your view of the source of the disturbance is obscured by clusters of shadows and trees along the path. Convincing yourself it was only a falling branch, you return to the task at hand: getting home alive. Suddenly, on the path in front you, a large mass you hadn’t yet noticed catches your attention.

You try to remember if it was there before. Did it move? You strain to focus, and then a calming revelation is provided by the moonlight… the object is only a rock. Relieved, you continue to walk, but now with a quicker pace.

Some time passes and you look ahead and recognize the clearing to the field where your abode lies. You relax, thinking the journey is over and you are safe. Safe, that is, until – seconds before you reach for the door – your worst nightmare bellows a terrifying shriek, steps out from the shadows behind you and charges!

This may sound like a bad horror movie trailer, but the above scenario may very well have been a reality for some of New England’s earlier generations. Small towns and rural settlements in colonial times not only endured harsh winters, droughts, and epidemics but also malevolent creatures that wandered our picturesque mountain ranges and opportunistically stalked travelers.

Native American tribes across the North American continent share chilling legends of a beast so terrifying that hardened men of the wilderness shudder to think of it. The creature in question is extremely tall, very strong, and has a unquenchable appetite for human flesh. Native Americans named this cannibalistic monster the Windigo (in Algonquian folklore, the wendigo or windigo, also wetiko).

In legends and lore, this malicious creature presents itself in three ways. It can assume a physical form as an extremely tall, hairy, and grotesque-smelling biped with very thin lips and large fangs. It can simulate the shape of any forest creature, or even the wind, which allows the beast to stalk the forests undetected by potential prey.

But the final form is what many humans feared the most – the possessing spirit of the Windigo that would impel the host to hunt, kill, then devour the flesh of his or her loved ones. Recorded accounts that dealt with Windigo possession never ended well for the individual who found himself the instrument of the fiend’s destruction. This spelled certain death for the possessed, followed by cremation.

The written history surrounding this nefarious beast suggests that an encounter with any aspect of the Windigo was most likely to occur during the frigid months of winter. One oratory tale describes the ordeal of a warrior who was forced to wait out a winter storm in a shelter with his family.

When the heavy snows ceased, he ventured out into the wilderness in search of game, before another impending storm would make any further attempt impossible. It wasn’t long before the warrior found tracks in the freshly fallen snow.

He followed the trail for a distance and then heard a loud hissing sound and noticed bloody footprints ahead of him in the brilliant white snow. Having heard many Windigo tales at his grandfather’s knee, he knew that a Windigo was close by, and it was watching him.

Before he could move to escape, the beast sprung upon him. The warrior dodged the attack and threw his spear, but the weapon inflicted no harm upon the demon. With only one chance left to survive, he tightly gripped his knife and waited.

When the creature attacked again, he sprung, stabbing it in the eyes and head. Writhing in agony, the fiend let go of the warrior and fell, dying, into the cold embrace of the deep winter snow. The body of the Windigo turned into mist and dissipated, leaving only a puddle of blood as any evidence the beast was ever there.

In another case, explorer David Thompson witnessed a tribunal to decide the fate of a young hunter. During a tribal meeting, the young man had rather unexpectedly blurted out that he wanted to eat his sister and would do what needed to be done so he could consume human flesh. After a quick debate amongst tribal officials, the young man’s penalty was decided.

His father was ordered to strangle his son with a rope until he was dead. A few hours later, the hunter’s body was burned until nothing remained so that the Windigo inside him could not return.

A popular hypothesis explaining how people came to be Windigos is by a so-called “Windigo psychosis”. Behaviorists attribute this cannibalistic behavior to prolonged periods of near starvation.

This, compounded with the ever present legends of the Windigo, contributed to the actions of souls weak from starvation. Studies show that this condition was more common in rural areas, and has become a rarity in our time.

But this still does not explain what the physical manifestation of the Windigo is. While conducting my research for this article, I came across many different theories as to what this creature may be.

Some suggest a different variety of Big Foot that can exhibit malevolent behavior and will consume weary woods travelers. And then there was a suggestion that maybe the beast is a dramatic description of a unkempt human, overwhelmed with melancholy.

No matter which theory you embrace, the greater question is: Do these dark, inhuman monsters still roam our woods, waiting for an opportunity to feed upon some poor unsuspecting soul, or even you? Ponder this before you venture into the woods alone.