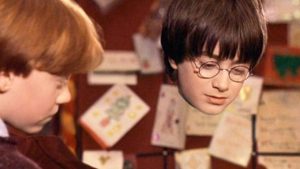 This has the capability of being a game changer, especially for the Government! Can you imagine having the capability to cloak macro objects underwater and in the air! While we believe this to be most likely man made technology it begs the questions….could its genesis be with alien technology. Educating Humanity is happy to bring you this news breaking story!

Objects large enough to be seen with the naked eye have been swept under an ‘invisibility carpet’ for the first time.
Invisibility cloaks were proposed in 2006, and prototypes that can shield objects for certain wavelengths of light have since been built. However, until now, physicists have been unable to fabricate a cloak that could hide macroscopic items at visible wavelengths. Two independent groups have now achieved this feat, by building transparent ‘carpet cloaks’, made from calcite crystals, that lie over the object to be hidden.

Carpet cloaks render covered objects invisible by bending light rays as they enter the cloak and then when they exit it — after they have bounced off the hidden object. The light is deviated in such a way that the rays seem to have been reflected directly from the ground underneath the object — as though the object was not there.

To build such a cloak you need a material that will bend the incoming and outgoing light rays by different amounts — determined by the dimensions of the object underneath, explains Baile Zhang, an optical engineer at the Singapore–MIT Alliance for Research and Technology (SMART) Centre in Singapore, who designed one of the cloaks. Calcite is perfect for the job because the speed at which polarized light passes through it depends on the crystal’s orientation. So by sticking together two pieces of crystal, it is possible to create a cloak that bends incoming and outgoing light by the desired amount.

“The fact that calcite’s optical properties depend on orientation is usually a disadvantage in making devices, but I realized we could actually exploit it to our advantage,” says Baile Zhang.

Natural solution
Baile Zhang and his colleagues have built a calcite carpet-cloak that can shield a steel wedge that is 38 millimetres long and 2 millimetres high from red, green and blue visible light3. The team designed their cloak to work under water. “I think that governments could make a lot of use out of a cloak that can hide objects on the seabed — although I won’t speculate on exactly what they may want to hide,” says team member George Barbastathis, a mechanical engineer also at the SMART Centre.

By contrast, an independent group led by physicists Shuang Zhang at the University of Birmingham, UK, and John Pendry from Imperial College London has built a calcite cloak that can work in air, hiding objects a few centimetres high. Pendry was one of the first scientists to propose how an invisibility cloak might work. The team, however, were unable to comment as their research has been submitted for publication and is under embargo.

Both of the calcite carpet-cloaks are much cheaper to make than previous invisibility carpets, which were built using intricately fabricated silicon microstructures and could only conceal microscale objects, says Baile Zhang. “Because they were so difficult and expensive to construct they are difficult to scale up,” he says. But the calcite cloak uses naturally occurring materials that cost only about US$1,000 to make and are easy to manipulate. “It’s not quite easy enough to make at home, but it’s not too far off,” says Baile Zhang.

Michal Lipson, a physicist at Cornell University in Ithaca, New York, says “one of the real worries about cloaking has been that people would only be able to cloak microsize objects.” Lipson adds that creating macroscopic devices now shows that “we are close to cloaking objects that we are familiar with in every day life”.

What Autonomous Killer Robots Mean For The Future Of War

Have Scientists Discovered a Way of Peering Into the Future?