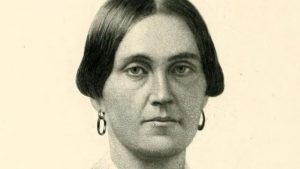 Surratt was executed for her alleged part in a conspiracy to assassinate The Great Emancipator. Some believe her spirit is earthbound because she was innocent.

Mary and John Surratt owned a tavern in Clinton Maryland. When John died, he left Mary in debt. She moved into their house in Washington DC, near Ford’s Theater and turned it into a boarding house, but this would ultimately lead to her downfall.

Boarders included Mary Surratt’s son, John, a Confederate courier, and people who supported the Rebels’ cause. John Wilkes Booth visited the house frequently to conspire with them to plan Lincoln’s assassination.

The boarding house was to be where Mary Surratt was arrested. It was almost midnight when she was roused from her bed and taken to the jail at the Old Brick Capitol to await her trial.

The boarding house and former tavern, leased by John Lloyd, were searched after the assassination. On the day of the crime, Booth asked Surratt and Louis Weichmann to deliver a package containing firearms to her former tavern. At the time, she didn’t know the contents of the package.

On her way home, Surratt ran into Lloyd, a former Washington police officer, on her way back home. When Lloyd was initially asked about the encounter, he denied that Booth had frequented his tavern. When questioned later, he claimed that Surratt told him to have whiskey and weapons ready for Booth who would stop by that night.

A military court convicted Surratt for her part in the conspiracy to assassinate Lincoln and condemned to death by hanging. She appealed the sentence until the day she was executed, proclaiming innocence.

Many people expected President Andrew Johnson to pardon Surratt. The federal government had never executed a woman. Her execution was delayed until the afternoon. Soldiers were stationed on every block between the White House and the execution’s site to relay the expected pardon. The order never came.

On July 7, 1865, she and her three co-conspirators were hanged. Surratt was the first woman executed by the Federal government.

Old Arsenal Penitentiary – This is where Mary and her co-conspirators were hanged. Their bodies were temporarily buried near the gallows before being move to permanent graves. A hooded figure wearing black, bound at the hands and feet, as Surratt was when she was executed has been sighted roaming about the site. Soldiers’ children said they played with a lady dressed in black clothing.

Surratt’s Clinton Maryland Tavern – Some witnesses saw Surratt’s specter on the stairway between the first and second floors. Others heard male voices in the back of the house when no one was there. Other phenomena include phantoms wearing clothing of Lincoln’s time and ghostly cries of children and footsteps pacing through the tavern’s upper story have been heard.

Surratt’s Washington DC Boarding House – Her apparition has been sighted. There are also unearthly sounds, whisperings of phantom voices and ghostly moans that some believe are manifestations of Surratt’s and Booth’s spectral presence.

Was Surratt Guilty of Conspiracy?

Questions remain about her guilt in Lincoln’s assassination. Weichmann was released after he testified against her. Later, he claimed the government forced him to testify.

His conscience bothered him until the day he died. Lewis Powell, a conspirator who was hanged with Surratt, publicly stated she was innocent minutes before his execution.

Some believe the case against her was circumstantial and involvement in the conspiracy was merely her association with the assassinations. The truth probably never be known.

Could it be that her ghost cannot leave the earthly plane because her innocence hasn’t been established?