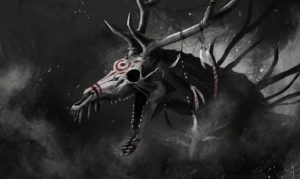 There are few chapters in North American history that have quite a sensitive nature as the Wendigo hunter Jack Fiddler.

Fiddler was a shaman and a well-respected member of the community, often called upon to bring down those who had acquired the hunger of the Wendigo and begun the long painful process of transformation.

And yet the strange story would eventually clash with the new ways of western rule when he was discovered by mounties after having killed a man who was allegedly about to turn into one of the monsters.

The case would never go to trial, and yet the Anishinaabeg tribe would never be the same. And for decades afterward the Wendigo would be to blame.

The Wendigo is a creature often associated with the act of cannibalism. After the people of certain tribes began eating the flesh of human beings due to isolation and starvation, it was said a transformation would take place.

This transformation, while subtle at first, would ultimately result in a cursed being that looked hardly human at all and would possess supernatural powers making it more difficult than ever to kill. Only the skills of a select few hunters could ultimately bring them down.

These men were often shamans, who would possess the ability to protect the tribe from the dangers of magical curses places on their people by opposing tribes and the various spirits of the region.

But when it came to the Wendigo, it was always preferred among the people of the tribe that the killing of a transforming Wendigo take place long before the creature went wild and fully transformed both to help the sufferer and to ensure the creature did not use its alternate form to overwhelm those attempting to euthanize it.

Of course that’s assuming a magical transformation was actually taking place. Skeptics will contend that this was a form of euthanasia to put an end to disease in the tribe at a time when medical assistance was not well understood.

To the northern tribes this was a practice that had been used for hundreds of years. And they certainly took the practice seriously. This was not to them merely the killing of a diseased person, but rather the saving of the individual’s soul before they were “turned.”

In a different context cultures may have been more sympathetic, but by the time the legendary Wendigo hunter was apprehended by the mounted police, newspapers were already making sensational stories about the northern “devil worshiping” tribes.

Jack Fiddler and his brother Joseph were arrested for killing a woman who was believed to be on the verge of transformation, though Jack committed suicide before he could go to trial.

Jack’s son Robert would eventually inherit Jack’s position and though he was not allowed to continue the family tradition of killing Wendigo, or as the Canadian government saw it, the murder of sick people, he did lead the tribe into a new and era fraught with its own perils.

During his life, Jack was said to have killed eighteen Wendigo, and was renowned as one of the best at his trade. Many would liken his ability to track and kill the creatures at any stage as putting him in the same category as Van Helsing or other such figures.

But as they soon would find, one man’s hero is another’s villain. With the death of the Wendigo hunter, the tribe would have to change and adapt to a new way of life, losing its rituals for destroying the mythical beasts in the process.

Today the Wendigo is thought to be mostly apocryphal, but occasionally sightings of yellow eyed monstrous beings in the Canadian wilderness cause some to question whether some could have been left over from a far different time.