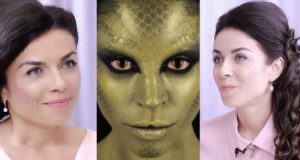 A truly chilling piece of the footage appears to show a Ukrainian television co-host briefly revealing that she has distinctly reptilian eyes.

This mysterious incident occurred during a television broadcast produced by AllatRa. The broadcast lasted for a few hours, and featured a man and a woman discussing Atlantis, spirituality and all manner of other fringe topics.

The woman in question looks up briefly at the ceiling before her eyes appear to blink sideways, revealing yellowish reptilian orbs before they return to normal promptly, and she resumes speaking.

Moreover, the paranormal YouTube channel which served to popularise the video was then briefly taken down under suspicious circumstances, and the owner of the channel seems to imply that this had something to do with the Russian government.

The idea of reptilians was popularized by David Icke, a conspiracy theorist who claims shape-shifting reptilian aliens control Earth by taking on human form and gaining political power to manipulate human societies.

Icke has stated on multiple occasions that many world leaders are, or are possessed by, so-called reptilians.

He contends that most of the world’s ancient and modern leaders are related to these reptilians, including the Merovingian dynasty, the Rothschilds, the Bush family and the British Royal family.