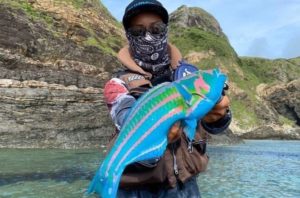 Japanese video blogger Miyagi Azusa boasted a very unusual catch on the social network. “I caught a fish of a interesting color,” he wrote.

Some of the commentators did not believe that such coloring was not the result of Photoshop. And others massively noted the similarity of fish with fantastic characters from the movie “Avatar”.

As it turned out, the fish belongs to the species Thalassoma cupido. But individuals of such a large size are rare. Usually, they are no bigger than a palm.

Thalassoma cupido is a species of wrasse native to the northwestern Pacific Ocean, where it occurs from Japan to Taiwan. It is an inhabitant of coral or rocky reefs and occurs at depths from 3 to 10 m (9.8 to 32.8 ft).

This species can reach 20 cm (7.9 in) total length, though most do not exceed 14 cm (5.5 in). This species can also be found in the aquarium trade and is farmed in Japan.