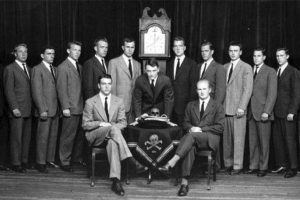 The secret society known as “The Order of the Skull and Bones” has been the subject of much speculation and intrigue for more than a century now. This enigmatic organization has been the target of a wide range of conspiracy theories, being blamed for everything from the Kennedy assassination to the creation of the nuclear bomb.

Founded in 1832 by William Huntington Russell, Skull and Bones (also referred to as “The Brotherhood of Death”) was established as an undergrad secret senior society at Yale University in New Haven, Connecticut.

While the existence of secret societies on college campuses is no surprise–Yale itself has several others such as Scroll and Key, Wolf’s Head and Berzelius–Skull and Bones in particular has gained notoriety for its strange initiation rituals, as well as for its list of reported alumni, many of whom happen to be some of the most influential and powerful names in the history of politics and business.

In the minds of many observers, Skull and Bones members (also called “Bonesmen”) have held a disproportionate amount of influence over American political and economic affairs, especially since the advent of the Industrial Revolution.

The vast wealth of families bearing such familiar names as Carnegie, Ford and Rockefeller has, at different times, been controlled by Bonesmen. Members of this elite order have also held prominent posts in key governmental (and quasi-governmental) organizations such as the Central Intelligence Agency, the Trilateral Commission and the Council on Foreign Relations.

In the 2004 presidential election, primary opponents John Kerry and George W. Bush were both Bonesmen, and when questioned about their affiliation with the secret order, both gave very vague and guarded responses, offering virtually zero concrete information.

While the mystery surrounding this secret order has provided plenty of fodder for conspiracy theorists, there can be little doubt that the influence of this organization–whether perceived or real–has been palpable throughout the past century.

The rumors that circulate around Skull and Bones are as intriguing as they are bizarre. One of the most controversial Skull and Bones legends involves Prescott Bush, George W. Bush’s grandfather, being one of a party of Bonesmen who allegedly conspired to dig up the grave of Geronimo, the famous Native American warrior, and steal his remains.

The Apache warrior’s skull, along with two bones and some horse riding gear, were reportedly pilfered from the sacred grave site in Fort Sill, Oklahoma in May of 1918, and taken back to the Skull and Bones Hall (otherwise known as “The Tomb”) on the Yale University campus.

The remains were allegedly placed in a display case, where visitors and members could view them upon entering the building. In 2009, on the 100th anniversary of Geronimo’s death, several Apache descendants of Geronimo filed a federal lawsuit against the Skull and Bones society, demanding that Geronimo’s remains be returned to his sacred burial site in Fort Sill. To date, the lawsuit has not gained any significant traction.

Other notable oddities that regularly surface regarding the practices of the Skull and Bones society include their arcane initiation rituals. Each year, fifteen candidates are “tapped” (i.e., selected for membership) and taken to Deer Island, a forty-acre private retreat on the St. Lawrence River in upstate New York, to be fully initiated into the club.

The island is owned by the Russell Trust Association, an alumni organization that serves as the official business entity of the Skull and Bones society.

Unofficial Skull and Bones history is replete with tales of the outlandish initiation rituals that have taken place on Deer Island, including Henry Luce (the founder of Time Magazine) having to lay naked in a coffin and divulge every detail of his sexual past to his fellow Bonesmen, as well as William F. Buckley being required to jump into a mud pie to complete his hazing process. 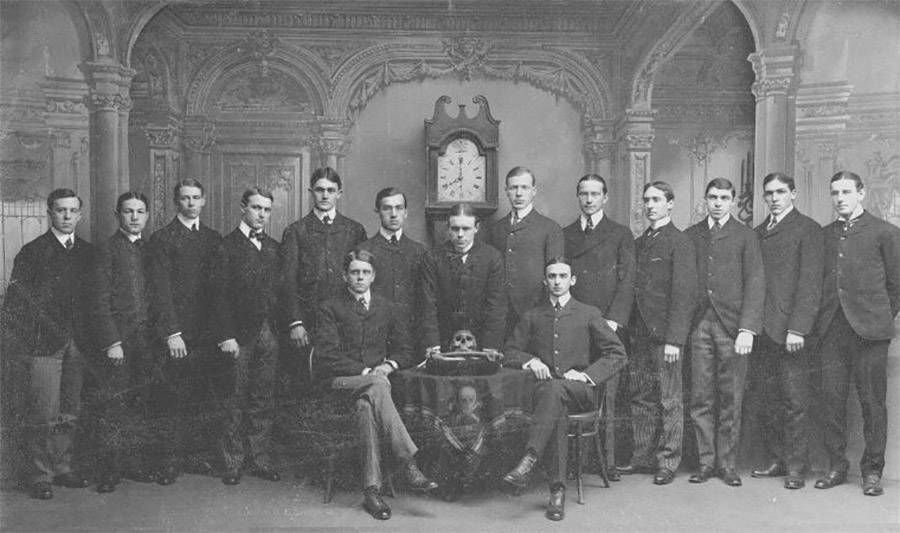 Members are reported to conduct mock worship rituals of a fabricated entity named “Eulogia”–the goddess of eloquent speech–and perform other curious occultic activities, the extent of which has never been fully disclosed.

Throughout its extensive history, the membership of Skull and Bones has been almost exclusively dominated by white Protestant males, further fueling its association with the wealthy “power elite” or “blue blooded” families that trace their lineage back to the original English colonists that settled in the New England area.

The exclusionary policies of Yale University typically kept minorities and women from having access to membership in the various campus-based secret societies, but after 1950 this began to change.

In 1969 Yale became coeducational, but oddly enough Skull and Bones remained exclusively male until 1992. Seven female candidates were chosen for membership in 1992, prompting quite a bit of controversy and opposition from many in the Skull and Bones alumni organization, but eventually the dispute was resolved.

The true identity and influence of the Skull and Bones society has been highly debated for decades. Some claim that it is a branch of the Illuminati, asserting that it is a secretive but pervasive establishment that controls the world through globalism and corporatism, while others see it as the covert engine that controls the CIA.

Countless books and web pages have been devoted to the scores of conspiracy theories that seem to accompany any discussion about the secret order. The advent of the Internet has permanently altered the capability of many organizations to keep their information private, and no doubt this fact has not been lost on those who depend on the ignorance of the masses to stay in power.

Whether or not the Skull and Bones society is all that its observers and critics claim it to be may never be fully known, but one thing is for certain: The Internet may eventually be able to throw a glaring spotlight on every detail of this mysterious organization, and no one knows for certain what type of activity that will ultimately reveal.