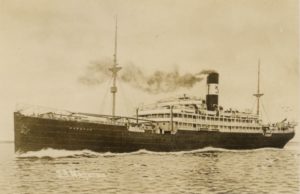 The SS Waratah was a 500 foot steamer sometimes referred to as “Australia’s Titanic”, disappeared off South Africa late in July 1909, with the loss of all 211 persons on board—no bodies, lifeboats, wreckage, or shipboard items of any kind were ever found, making this one of the best-known examples of a ship lost entirely without trace.

The disappearance of the ship remains one of the most baffling nautical mysteries of all time. The Waratah was a British cargo-passenger vessel, built by Barclay Curle & Co in Whiteinch, Glasgow (Scotland) and operated by the Blue Anchor line on the run between England and Australia by way of the Cape of Good Hope.

That she was not fitted with wireless was not unusual for that time when radio was still very new, although no doubt the subsequent court of inquiry might have wished that a radio telegraphy facility had been installed.

This vessel was named from waratah, the Aboriginal word for the bright red flower of the shrub, genus Telopea, found in eastern Australia (the waratah is the floral emblem of New South Wales, not the national flower of Australia).

On 5 November 1908, the Waratah began her maiden voyage from London, England, with 689 passengers in third class accommodation and 67 first class passengers. Her captain was Joshua E. Ilbery, a master with 30 years nautical experience. 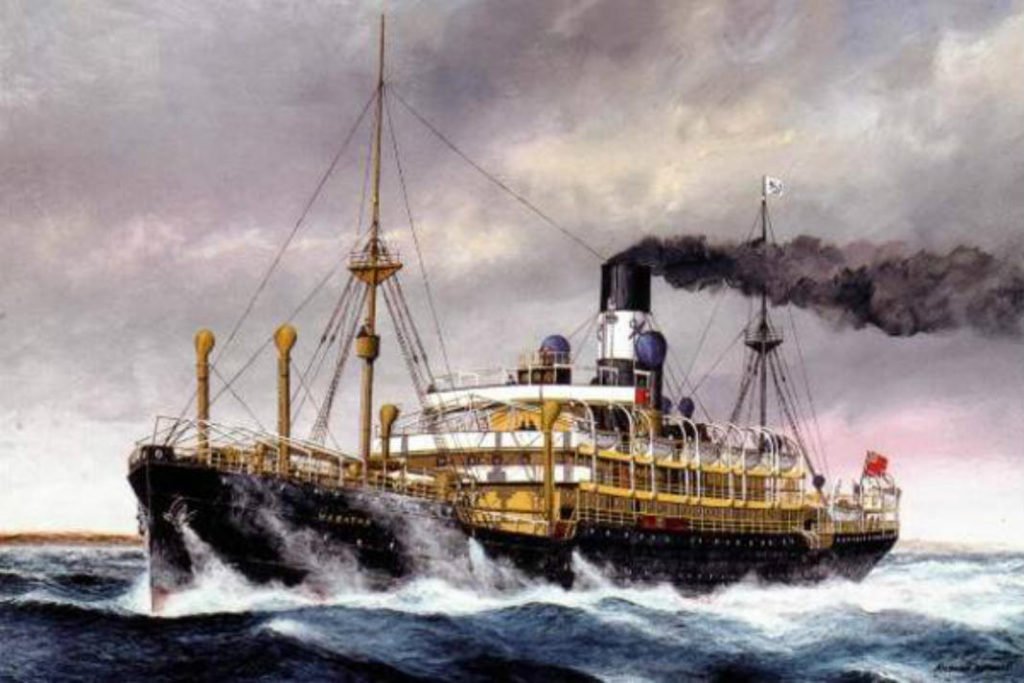 The subsequent inquiry into her sinking raised some disputed reports of instability on this voyage. On the ship’s return to England there had been some discussion about stowage between the owners and the builders.

Under the same command of Captain Ilberry, the Waratah was on her second round-trip, having sailed from London in 27 April 1909, she set out on her second trip to Australia. When she reached Australia she landed her passengers at Sydney, loaded some 6,500 tons of cargo, then set out for Durban, South Africa, where she took on coal.

This was uneventful, and on 1 July 1909 she set out from Melbourne on the return journey. She was bound for the South African ports of Durban and Cape Town and was then to return to London.

At Durban an interesting incident occurred. A businessman by the name of Claude G. Sawyer, who had booked his passage home from Australia to England, suddenly left the vessel. He took himself and his luggage ashore despite the fact that he had no business affairs to attend to in Durban.

They had heard the reason for Mr. Sawyer’s departure. He said he had recurrent bad dreams. Night after night the vision that had come to him in his bunk had terrified him into wakefulness.

The ship then left for Cape Town, eight hundred miles away, on the evening of July 26 with 211 passengers and crew. On 27 July, it passed the Clan McIntyre. Later that day, the weather deteriorated quickly (as is common in that area).

A wind gusting to 50 knots (90 km/h) combined against the tide and ocean swell to build waves up to 30 feet (9 m). That evening the Union-Castle Liner Guelph passed a ship and exchanged signals by lamp, but due to the bad weather and poor visibility was only able to identify the last three letters of her name as “T-A-H.”

The same evening, a ship called the Harlow saw a large steamer coming up eastern of her, working hard in the heavy seas and making a great deal of smoke, enough to make her captain wonder if the steamer was on fire.

When darkness fell, the crew of the Harlow could see the steamer’s running lights approaching, but still 10–12 miles behind them, when there were suddenly two bright flashes from the vicinity of the steamer and the lights vanished and that was the last time the Waratah was seen. The Waratah was expected to reach Cape Town on 29 July 1909. It never reached its destination, and no trace of the ship was ever found.

Two days later the Clan MacIntyre reported that the weather had been unusually bad, with fierce winds and “tremendous seas” (it was the Southern Hemisphere winter); nevertheless, she and other vessels in the area had come through safely.

The master of the Clan MacIntyre told the board of inquiry that when she was sighted on July 27 the Waratah was not listing and neither was she rolling unduly in the heavy weather. The reason for her complete disappearance has never been satisfactorily explained, although there were persistent rumors that the vessel was unstable.

In September 1909, the Blue Anchor Line chartered the Union Castle ship Sabine to search for the Waratah. The search of the Sabine covered 14,000 miles, but yielded no result. In 1910 relatives of the Waratah passengers chartered the Wakefield and conducted a search for three months, which again proved unsuccessful.

The official enquiry into the fate of the Waratah was held at London in December 1910. Among others, Claude Sawyer gave testimony on that occasion. When the Waratah was posted missing, Sawyer appeared at the inquiry and explained the nature of these dreams. In them he is leaning on the rail and staring out to sea. 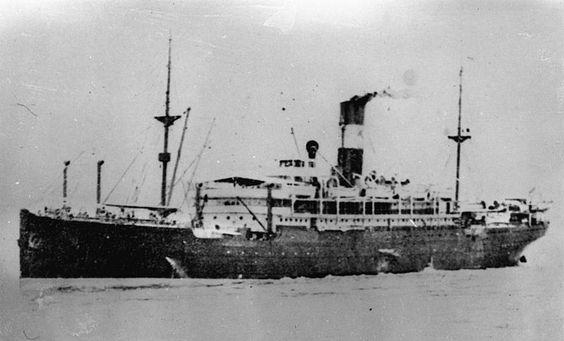 A blood-spattered knight dressed in armor and mounted on a horse suddenly rises out of the waves, holding aloft in one hand his sword and in the other a blood-soaked rag, all the while apparently trying to shout something to Sawyer. The message seems to be, “The Waratah ! The Waratah !,” then the phantom knight disappears. Nobody now laughed at Sawyer’s story—he was, after all, the only survivor, and that by inexplicable default.

In the “second half of the twentieth century” a pilot in the South African Air Force reported that while flying over the sea just off the coast he had seen, very clearly, the outline of a ship lying on the bottom, close in to the shore. The pilot claimed he “recognized” the wreck as the Waratah (it is not clear how he achieved this feat, the ship in question having already been submerged for more than fifty years), but subsequent efforts to locate it again failed.

Some thirty or forty years ago a popular writer of drama and mystery wrote a story about a cargo liner that ran into some of the very bad weather that often attends a passage through the Mozambique Channel, that strait of unruly water between Mozambique on the east coast of Africa and the island of Madagascar.

The Agulhas Current sweeps south through this relatively shallow channel against the prevailing southerly winds, a confluence of events that can bring on mountainous waves. The author has his ship encounter seas so fiercely steep that an underwater mountain is momentarily revealed in the troughs, with a huge cavern in its side into which the vessel is driven headlong, to be immediately engulfed forever by the raging ocean.

Many years later, the story continues, an air force pilot, in search of the wreck of the ship in which his father had been an officer, discovers this very same underwater cavern during a terrible storm, brings his aircraft safely alongside the ship’s hulk that he discovers therein (exactly how he achieves this underwater miracle remains a mystery), and a meeting is thereby effected between long-lost father and lately landed offspring.

In 1977 a wreck was located off the Xora River Mouth. Several investigations into this wreck, in particular under the leadership of Emlyn Brown took place. It is however widely believed today that the wreck off the Xora River Mouth was that of one of many ships which had fallen victim to German U Boats during the Second World War.

It has proven particularly difficult to explain why the Waratah should be found so far to the north of her estimated position. Further attempts to locate the Waratah took place in 1991, 1995 and 1997.

While in 1999 another reports reached the newspapers that the Waratah had been found 10 km off the eastern coast of South Africa (Addley). A sonar scan conducted by Emlyn Brown’s team had indeed located a wreck whose outline seemed to match that of the Waratah.

In 2001, however, a closer inspection revealed differences between the Waratah and the wreck. It appears that the team had in fact found the Nailsea Meadow, a ship which had been sunk in the Second World War.

The most popular theory advanced to explain the disappearance of the Waratah is an encounter with a ‘freak wave’, also known as a rogue wave, in the ocean off the South African coast. Such waves are known to be common in that area of the ocean. It is most likely that the Waratah, with what seems to be marginal stability and already ploughing through a severe storm, was hit by a giant wave.

This either rolled the ship over outright or stove-in her cargo hatches, filling the holds with water and pulling the ship down almost instantly. If the ship capsized or rolled over completely, any buoyant debris would be trapped under the wreck, explaining the lack of any bodies or wreckage in the area.

This theory was given credibility through a paper by Professor Mallory of the University of Cape Town (1973) which suggested that waves of up to 20 meters in height did occur between Richards Bay and Cape Agulhas. No evidence except the absence of the wreck supports this theory, however.

Several people have suggested that the Waratah was caught in a whirlpool created by a combination of winds, currents and a deep ocean trench, several of which are known to be off the southeast coast of Africa. This would explain the lack of wreckage, but there is no firm evidence that a whirlpool of sufficient strength to almost instantly suck down a 450-foot long ocean liner could be created as suggested.

Given the evidence from the officers of the Harlow, it has been speculated that the Waratah was destroyed by a sudden explosion in one of her coal bunkers. Coal dust can certainly self-combust and in the right proportions of air be explosive. However, no single bunker explosion would cause a ship the size of the Waratah to sink instantly, without anyone being able to launch a lifeboat or raft, and without leaving any wreckage.

Several supernatural theories were also put forward to explain the disappearance of the Waratah. One of them is the legend of Flying Dutchman that was reported by Clan MacIntyre’s chief officer, C. G. Phillips while exchanged signals with the Waratah when they sighted each other.

This statement made to the English newspapers at the time (Phillips later became commodore of the Clan Line, an indication of his reputation for being capable and level-headed):

“A gale of hurricane force had been lashing the seas when the Waratah passed us. Some hours after I had sent the signal to the liner I was standing on the bridge when I sighted another ship, a sailing vessel. There was something strangely old-fashioned about her rig.

“I’m not a superstitious man, but I know my seafaring lore. The rig of the strange vessel immediately brought to mind the legend of the Flying Dutchman… the phantom ship held me spellbound. It disappeared in the direction taken by the Waratah, and I had a feeling it was a sign of disaster for the liner.”

And another one is Claude Sawyer’s vision that was reported to the London inquiry, he claimed he had seen on three occasions the vision of a man “with a long sword in a peculiar dress. He was holding the sword in his right hand and it was covered in blood.” This vision was one of the reasons why he decided not to continue the voyage on the Waratah.