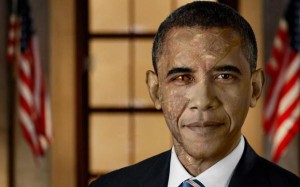 As far as conspiracy theories go, David Icke has certainly made a name for himself. Operating in the name of exposing the reality about “who and what is really controlling the world”, Icke has written sixteen extremely long books, given multitudinous lectures and seminars, and appeared on many television and radio shows in search of, and touting, his alleged “truth”.

The result is a hypothesis that has entered the mainstream consciousness, collecting quite a David Icke following and quite a bit more ridicule. But what is behind Icke’s ideology—what causes Icke to tick (sorry, too corny and obvious to pass up)?

Once upon a time, David Icke was a pretty normal, innocuous British guy. An ex professional football (that’s soccer in American) player turned television sports presenter, Icke was a fairly respected household name in England, and even became one of the six speakers for the Green party in the United Kingdom. However, the chronic arthritis that originally caused him to quit playing football at twenty one also made his thoughts take a turn towards the paranormal, specifically New Age treatments for his persistent pain.

His dabbling, as well as severe depression, led him in 1990 to visit a psychic named Betty Shine, an interview that would change the course of his life forever. She told Icke that he was a healer, placed on the planet for a purpose, and that he would eventually become world famous, but the process would result in much opposition.

Apparently, this pronouncement went to Icke’s head. In February, 1991, he went on a tour of the Sillustani burial ground in Peru. There, he claims to have had his first revelation, akin to being plugged into an electrical socket, and having a drill in his head (doesn’t sound so pleasant). He attributed this feeling to “kundalini”, a force which activated his chakras and brain, and thus reached a higher level of consciousness.

He then entered his “Turquoise Period”—he wore nothing but turquoise because he claimed it put him on a higher spiritual plain. While there, he also had his psychic mistress move in with him and his wife, leading to their being dubbed (very cleverly) the “turquoise triangle”. This, however, was only preparation for the really weird stuff he had in store for the public.

In March 1991, Icke, his wife, and the mistress called a press conference. Therein, he claimed that he was a “channel for the Christ spirit”, and preceded to predict a series of traumatic world events, including severe hurricanes, volcanic eruption, political disruptions, and earthquakes. All of these events were supposedly told to the triangle by “voices”, and were going to lead up to the end of the world in 1997 (hm.). The following month, he appeared on the BBC’s Terry Wogan show.

During his interview, he asserted that he was the son of God, and reiterated the idea that the world would soon be devastated by earthquakes and hurricanes. He was severely belittled by Wogan, who made sure to point out to Icke that the laughter of his audience was “not with him, but at him”. Humiliated, Icke faded into obscurity for a couple of years, only to come back with a vengeance and the new conspiracy theory that would make him (in?)famous.

The basis of Icke’s comprehensive theory originates in his 1999 book, “The Biggest Secret”. The secret Icke discovered in his research process is that the world is run by lizard aliens. More specifically, the origin of humankind is a huge breeding project undergone by a race of reptilian aliens from the planet Draco, called the Anunnaki.

They came to Earth (perhaps from evacuated Martians) to mine “monoatomic gold”, which allows them to process vast amounts of information, speed up their trans-dimensional travel, and shape shift more easily into the human form. These mysterious aliens live in the “lower fourth” or “lower astral” dimension, with demons, and feed off the fear, guilt, and aggression of their human slaves, so they continually foster war, sexual perversions, genocide, the mass slaughter of animals, and black magic ritual sacrifice to stave off their bloodlust and retain their powers. Additionaly, the reptilians created organized religion, race, ethnicity, and sexuality to further divide the human population.

The Anunnati periodically mate with humans in order to create very distinct ruling bloodlines: according to Icke’s theory, the crossbreeding process happened three times: 200,000-300,000 years ago (creating Adam), 30,000 years ago, and 7,000 years ago.

The Anunnaki spawn living in the world resulted in the “Babylonian Brotherhood”, so named because they originated in the ancient Middle East. This organization has ruled the world for all time, creating the Illuminati, the Round Table, the Bible, the Council on Foreign Relations, Chatham House, Tulateral Commission, the IMF, and the United Nations, as well as blanketing the media, military, science, religion, and the Internet. The Anunnaki also bred with an extraterrestrial race called the “Nordics” in order to produce a race of human slave masters, called the Aryans (of Nazi fame).

The Anunnaki have fiercely protected the interbreeding of these bloodlines, because they are bred to have no human consciousness. In essence, the ruling elite are “reptilian software” who mindlessly do the bidding of the fourth dimensional aliens. These world leaders retain many reptilian traits: cold bloodedness, desire for top down control, and fanatical obsession with ritual that leads to fascism, nationalism, and racism. They apparently first laid out their plans in “The Protocols of the Elders of Zion”, which is widely accepted as a Russian hoax published in 1903 to spur anti-Semitism (Icke thinks otherwise).

The bloodlines from the most recent genetic interference have resulted in the ruling class of the modern world, and include the British House of Windsor, the Rothschilds, Rockefellers, European royalty and aristocracy, and most Eastern establishment families in the United States. Forty three (out of forty four…not bad) of American presidents have been reptilians, as are Queen Elizabeth II and Steamboat Willie (a country singer). As previously stated, this carefully protected bloodline is unable to mingle with the other two tiers of people in the world—the sheeple, or people who blindly follow the manipulations of the Anunnaki, and the exclusive third tier (of whom Icke is a part) who see through the lies.

However, the reptilians are not nearly as secretive or smart as one would expect them to be as the creators of the universe, as people frequently sight them mysteriously turning into their reptilian form on television and in public appearances. The ultimate goal of these “Global Elite”—also called the “great work of ages” or “Brotherhood Agenda”—is world domination and a micro-chipped population (I guess the Anunnaki have been waiting a really, really long time for the crummy old third dimension to develop sufficient computer technology).

The Global Elite, or Red Dresses, continually engage in Satanic rituals, pedophilia, kidnapping children, and drug parties when they are not planning huge world terror events such as the Holocaust, Oklahoma City Bombing, and 9/11 in order to cause a panic to further implement their carefully plotted control. The reptoids and their minions are currently centered in London.

The Conspiracy of the USS Indianapolis