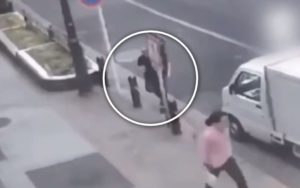 A mysterious online video showed a man “teleporting” to a street, conspiracy theorists have sensationally claimed.

The surveillance video starts with a normal street scene that shows people walking along a pavement as cars drive past on the road.

Then, a man in black appears behind a street sign seemingly from nowhere. He jumps over the fence, and runs off-screen.

Some claim it was real proof of teleporting technology while others were more skeptical.

The video may have been edited very well. A skeptical observer pointed out: “Just edited out the bus he just stepped off.”

Responding to this, another commentator said: “I thought that was a good theory but why would a bus stop be next to an area where passengers would have to step over a rope /cable barrier?”

A third puzzled viewer wrote: “It would seem like he teleported in because everyone else in that scene was moving normally without a skip or pause in their moments. You can tell it wasn’t a camera glitch cause the people near him have no skips in their walking process, very weird.”