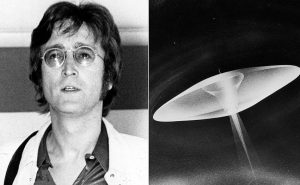 Cult English musician and artist John Lennon believed that since childhood he came into contact with representatives of extraterrestrial civilizations, and a few times the aliens even abducted him.

This sensational news for ufologists was shared by Mei Pang with the British tabloid journalists “The Sun”. May Pang – a former girlfriend, personal assistant and coordinator of the legendary rock band The Beatles.

John and May had a romance of eighteen months. During this time, the musician managed to reveal to her the secret of his interaction with the aliens. According to the woman, Lennon was literally obsessed with unidentified flying objects and alien life forms, however, he kept these hobbies secret from the public because he considered them very personal.

According to Pang, the composer told her that from the earliest years he felt special because he was abducted several times by “green men” and he repeatedly saw their intergalactic ships.

May also says that on August 23, 1974, she saw a UFO with her own eyes when she stood with John on the balcony of his home in Liverpool. It is noteworthy that on that day other people living on the north-west coast of England noticed an unidentified flying object. The appearance of the “flying saucer” was truly shocking to the girl of the composer, but John looked extremely calm as if such events were his usual habit.

Evidence of Lennon’s belief in aliens was found earlier. For example, in 1984, he released the song “Nobody Told Me”, which has the following line: “There’s a UFO over New York and I ain’t too surprised.”

Last year, British ufologist Russ Kellett bought from a private collector a rare sketch on paper, made by the hand of the most famous “Beatle”. In this schematic illustration you can see several houses, the Brooklyn Bridge, the musician himself, the woman next to him, as well as the “flying saucer”.

“White lights, red lights,” say the singer’s signatures to various elements of the alien aircraft. This, by the way, is a very common description of UFOs – such objects are found in almost every corner of the Earth.

Israeli illusionist Uri Geller crossed paths with John several times when he lived in the United States. According to the magician, once Lennon told him that he had met insectoid aliens that looked like huge beetles. It happened in New York.

The singer slept at night with his wife, Yoko Ono, and suddenly a mysterious light appeared in the window. The composer opened the front door and saw four tall creatures, outwardly representing a cross between people and beetles.

“They did something to me,” Lennon told Geller. “I don’t know what, but since then I have been feeling the change. It was not a dream, and at that time I was no longer indulging in hallucinogens. I wanted to get rid of the presence of these creatures, but I was paralyzed and could not even breathe. This lasted for about a minute, then they just disappeared, and I went back to my bed and slept the whole next day”.