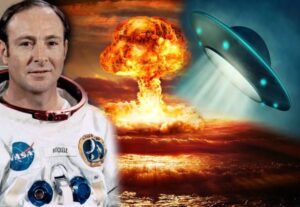 Dr. Edgar Mitchell, the sixth man to walk on the Moon during the Apollo project, on 2008 appeared on a UK radio show where he claimed that aliens are real and that people at NASA have known this for many years.

Radio DJ, Nick Margerisson, of Kerrang! Radio, could not believe his ears as Mitchell openly discussed the subject on his radio show.

Here is the complete transcript of the show. Broadcast on: The Night Before with Nick Margerrison, Kerrang! Radio, 22/07/2008 23:00 GMT

Nick Margerrison: Do you believe in life on other planets?

Dr Mitchell: Oh yes there’s not much question at all but there’s life throughout the universe, we’re not alone in the universe at all

N – You’re convinced that we’re not alone in the Universe?

DM – Oh I know for sure that we’re not alone in the Universe. Now have we been able to identify for sure where the other planets are? No we have not. Certainly not in our Solar System. But they’ve identified quite a number of other planets now that very likely could be life bearing planets. And I’ve been very privileged enough to be in on the fact that we have been visited on this planet and the UFO phenomenon is real although it’s been covered up by governments for quite a long time.

N – Woah. Hang on a minute this is big. Woah all this is quite a shock to me.

DM – Well I’m sorry have you not been reading the papers recently, its starting to open up quite a bit.

N – Well this is a lot of information to take on board. I’ve heard crazy UFO nuts tell me this kind of thing before, I’ve never had Dr Ed Mitchell – the sixth man to walk on the moon – a respected scientist in his own right announce to me that we’ve been visited by aliens from other planets and they’re definitely out there – there’s no debating it?

N – So you believe the whole deal

DM – There’s more nonsense out there about this than real knowledge – but it is a real phenomenon and there’s quite a few of us – its been well covered up by all of our governments for the last 60 years or so but slowly its leaked out and some of us have been privileged to have been briefed on some of it. I happen to have grown up in Roswell in New Mexico where presumably the Roswell incident of 1947 took place and I’m quite knowledgeable about there since I grew up there but I’ve also been in military circles and intelligence circles that knows beneath the circles of what has been public knowledge that – yes we have been visited.

N – Wow. So you’ve been briefed on the fact that we’ve been visited?

DM – Well briefed is one word for it. I have been involved in much of this work – now its not my main work, its not my main interest but I have been deeply involved in certain committees and certain research programmes with very credible scientists and intelligence people that do know the real inside story and I am not hesitant to talk about it.

N – What is the real inside story?

DM – Well I’ve just been telling you, we have been visited

N – So are we in regular contact or was it a one off crash?

DM – There’s quite a bit of contact going on. I can’t tell you because I don’t know all the inside details because that isn’t my main interest but the fact is that we have been visited, the Roswell crash was real and a number of other contacts have been real and ongoing. It’s pretty well known to those of us who has been briefed and been close to the subject matter.

N – So why is it being covered up then? Why is it not mainstream?

DM – The reason for that goes back to the main incidents that started taking place after World War Two when in the United States at least – I can’t speak for the European governments or the South American governments – all of whom have recently started opening their files and this is starting to open up. Look at the internet or some of the International press and you start to get the stories coming out now

N – I’ve had people on the show telling me the governments are mounting up towards disclosure towards saying that this is the case. Do you think there will be an actual disclosure this year?

N – Do you think we’re ramping up to the UK admitting?

DM – Well I can’t say how fast it’s going to happen but certainly the public awareness is increasing, the public acceptance is increasing. The attempts to cover up seem to be decreasing, I think we’re heading toward real disclosure and there are some very serious organisations moving in that direction.

N – What do you think the impact will be on the world when it is finally mainstream news that there are alien beings that live outside this planet?

DM – Certainly in the United States well over 70% of the people now accept this as fact. They do not know all the correct story but they accept the fact that there’s visitation. There are UFO’s in the sky all the time which are very likely to be alien craft. Now not all of them are – I suspect some of them are home-grown. I suspect that in the last 60 years or so there has been some back-engineering and the creation of this type of equipment that is not nearly as sophisticated – yet – as what the apparent visitors have

N – As part of you knowing about this and also going public with this, are you worried with your safety?

DM – I think those days are gone. That used to be a concern among the people on the inside but I don’t think they’re knocking anybody off for that anymore, or doing drastic things to them

N – What do you think the intent of the aliens is? Is it hostile or peaceful?

DM – It’s not hostile. It’s pretty obvious that if it were hostile we’d have been gone by now.

DM – We could have been. We had no defence if that’s what their real intent was

DM – You’ve seen some of the pictures. The pictures that I know of are little people that look strange to us as far as I know from my contacts that have had contact – that looks pretty accurate

N – Do you think other people that were involved in the moon landings know about this?

DM – Some of them do but again it’s like other people, If you’re interested enough to dig into it and want to know about it – you can know about it.

N – This has been easily one of the most significant conversations of my life, unbelievable. I want to thank you for joining us, wow what an incredible conversation

Edgar Mitchell told us all this back in 2008. Then, officials from NASA, however, were quick to play the comments down.

In a statement, a spokesman said: “NASA does not track UFOs. NASA is not involved in any sort of cover up about alien life on this planet or anywhere in the universe.

“Dr Mitchell is a great American, but we do not share his opinions on this issue.”

But what do we see now? Gradually the UFO phenomenon becomes real and lawmakers are demanding answers from U.S. intelligence agencies and the DoD on the potential existence of UFOs.

Mitchell publicly expressed his opinions that he was “90 percent sure that many of the thousands of unidentified flying objects, or UFOs, recorded since the 1940s, belong to visitors from other planets”.

He offered his opinion that the evidence for such “alien” contact was “very strong” and “classified” by governments, who were covering up visitations and the existence of alien beings’ bodies in places such as Roswell, New Mexico.

Later, in 2015, Mitchell said in an interview with the Daily Mirror that extraterrestrials “had been attempting to keep us from going to war [with Russia] and help create peace on Earth.”

He also said that “White Sands was a testing ground for atomic weapons—and that’s what the extraterrestrials were interested in. They wanted to know about our military capabilities.”

Mitchell died under hospice care in West Palm Beach, Florida, at the age of 85, on February 4, 2016, the eve of the 45th anniversary of his lunar landing.