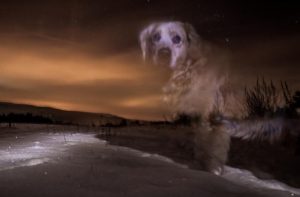 There is an old wives tale that tells of being able to see spirits through a cat or dog’s eyes if you stand behind them and look over their head in the direction they are staring.

Countless people have reported being scared out of their wits when their dog or cat stops suddenly on the way down the hall and begins to growl or hiss at something unseen. There have been reports of dogs refusing to go down the stairs of a basement in a reportedly haunted house and cats refusing to enter the attic.

Many paranormal investigators use dogs for exactly this reason. Canines especially seem to be sensitive to the unknown, and are pretty good at sensing when things are not right. They are the ones that refuse to travel further down a dark road or are reluctant to enter the woods at certain spots. This is prevalent in Native American legends where parts of the woods were deemed to be evil places because animals would not venture in.

There is also some talk that animals do not have souls, and therefore can not return after death. If animals are made from the same stuff as humans, why can’t they come back? There are many stories out there about a loved pet returning to visit their family after death, either through the sound of a collar jangling, the scent of the animal, or the actual physical contact of seeing the animal or feeling them curl up on the end of the bed.

Another theory in this case is that as we love our pets, we “give them” life, a spirit so to speak. This is an energy created from all of the emotions that we have in connection with them. Whatever your beliefs about animals having a spirit are, it is likely that if humans can manifest as spirits, so can animals.

The last section on animals and haunting deals with dark shadow animals, or the black cats and dogs, even sometimes birds or horses, and even more chilling, the shapeless animal specters that foreshadow tragedy.

These evil presences entail a more active haunting than a loved animal coming back, or the sense of something being wrong if your animal begins to whimper or growl at seemingly nothing. Rabbits, goats, and rodents – typically always black in color – are thick in legend as having shown up preceding a tragedy.

While this belief is largely steeped in superstition leading back as far as the inquisition, there have been notable “coincidences” throughout history. One case in particular was the abandoning of the luxury liner the Louistiana by the ships mascot, a small black cat just before she set sail and subsequently was hit and sank during the war with Germany.

So the next time your dog refuses to go any further down the path or your kitten spits and hisses at the ceiling, hold them up and look through their ears at whatever they are seeing – you may be in for a surprise.