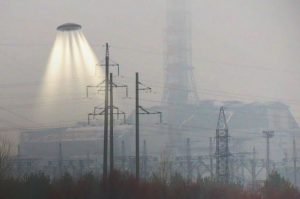 The former US Air Force captain says he has witnessed an extraterrestrial force and that Earth’s governments keep the knowledge of alien activity a secret because they receive high technology from the aliens.

He also stated that aliens have disabled nuclear missiles as a serious warning to humanity.

Former US Air Force Captain Robert Salas says that on March 24, 1967, a UFO disabled ten independently launched US nuclear missiles because extraterrestrial life does not want us to use nuclear weapons.

Salas, who claims the unexplained incident took place at Malmstrom Air Force Base in Montana, USA, adds that the global intelligence community is aware of the aliens but has been deliberately hiding information about their activity for decades.

He says his commander at a secret underground missile-launch control room was ordered to sign a silence agreement regarding the bizarre UFO incident.

“I was in charge of ten nuclear missiles at the time when the UFO appeared and hovered over our facility, and while it was hovering there, all our guards saw it,” Salas told British reporters.

“I was underground 60ft, locked into a concrete capsule. It was reported to me directly by those guards.

“While the object was up there we lost all ten missiles due to guidance and control failure.”

Captain Salas told The Sun Online: “This object, whatever it was, would have had to send a signal to each missile separately and disable the guidance system.”

Salas claims that their team at the facility spent a day trying to figure out what happened to the missiles, and they eventually regained control, but never found any damage or explanation for the malfunction.

He added that at another nuclear missile launch site, something similar had happened a week earlier, on March 16, 1967.

“I can only speculate why this happened. It was a demonstration of an object of extraterrestrial origin, and I am not saying this on the basis of simple frivolity. I think it was a message to all of us on planet Earth that we need to get rid of nuclear weapons.”

The subsequent order to never tell anyone about this, as well as the countless reports of other UFO sightings, convinced this Air Force veteran that governments are united in covering up for clashes with aliens.

Salas suggests that the reason for this secrecy may be that world powers are benefiting from alien technology as a bargaining chip with other civilizations.

He added to The Sun: “There is a worldwide, let’s say, cabal that is exchanging information in secret.

“The intelligence community may be involved in a world cover-up.”

“There are very deeply held secrets. The Roswell case in 1947 which offers plain evidence of two crashes in New Mexico.

“In 1947 our government knew they were dealing with extraterrestrial entities.”