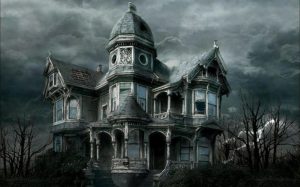 Well, just like everyone else’s, this too is a true story. This takes place, at the time, who used to be my bestfriends home in Bucks County over by Jericho Mountain. Keep in mind, Bucks County is known for its hauntings all over.

My girlfriends home was designed by her Mother, God rest her soul! The home sat back in the woods up against a hill. It was impossible to see it from the road. A lot of the activity started after her Mother and Brother both passed away a year apart.

At the time, her Mother was having a really hard time coping with the passing of her younger son from a car accident, so from that point on she just deteriorated. One morning while her Mother was up and in the kitchen sitting in her “favorite chair” she suddenly passed away due to a massive heart attack. I’m just laying ground as to what was to come next.

The family took it very hard. My girlfriend and her father were the only ones left living in the home. Well, one night she asked me to sleep over. I did.

While we were in her brothers’ old room looking for some things, I heard something fall from in the bathroom, like a brush hitting the tile flooring. Needless to say, the door was closed and hasn’t been used for a lot of years. My girlfriend and I went to investigate.

While I was reading, the room became very cold and you know when your not alone, the hair stands up the back of your neck, well, mine did. Next thing you know, the CRASH got even louder and the door started to bang as if someone was on the other side trying to get out!

I didn’t stay around very long to wait. I ran out of the room and flew down the stairs. I asked her if she heard anything, she said: “No, why?!”

Well, I told her what happened. She turned white.

After everything calmed down, a few hours later we were sitting in her living room watching TV. Something made me look up into the kitchen. The next thing I know I’m watching her mother’s chair move back, like someone was getting out of it and you could hear someone walking to the back bedroom. We both saw this and decided to follow the noise. We went into her parents’ room, and there on the bed was an impression of someone laying down, but on her mother’s side of the bed.

For the following year while we were still friends, there was always something happening in her home. But, that’s another bunch of stories…

Why Did They Choose Me? My True Ghost Story