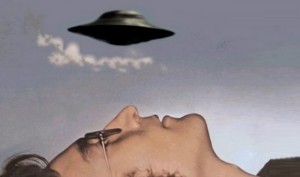 On August 23rd, 1974 John Lennon walked out on to the balcony of his New York flat, and seen what he later described as a “Flying Saucer” hovering closely, just above his window. This article includes an interview with Lennon’s assistant/girlfriend May Pang, who also witnessed the event, which completely describes the encounter.

“It looked like a flattened cone with a brilliant light on top.” -May Pang, assistant to John Lennon, describing the object they allegedly saw from Lennon’s balcony in NY City.

Lennon became so completely fascinated by the event, that he talked incessantly about the incident, and even included the encounter within two different songs on different albums.

May Pang was more than willing to give me the scoop on John’s Big Apple UFO encounter because – as it turned out – she was right there at his side during the incident. We had just ordered up some pizza and since it was such a warm evening, we decided to step out on the terrace. There were no windows directly facing us from across the street, so John just stepped outside with nothing on in order to catch a cool breeze that was coming in right off the East River. I remember I was just inside the bedroom getting dressed when John started shouting for me to come out onto the terrace.

I yelled back that I would be right there, but he kept screaming for me to join him that instant. As I walked out onto the terrace, my eye caught this large, circular object coming towards us. It was shaped like a flattened cone, and on top was a large, brilliant red light, not pulsating as on any of the aircraft we’d see heading for a landing at Newark Airport. May says she and John stood there mesmerized, unable to believe what they were in the process of observing.

When it came a little closer, we could make out a row or circle of white lights that ran around the entire rim of the craft – these were also flashing on and off. There were so many of these lights that it was dazzling to the mind. Spellbound, the couple watched the UFO move directly over the building next to where they resided. It was, I would estimate, about the size of a Lear jet and it was so close that if we had something to throw at it, we probably would have hit it quite easily.

During the time that it was almost directly overhead, May says that she didn’t hear any noise. We often had helicopters flying above us, but this was as silent as the night, seventeen stories up above street level. Finally the object passed from view, leaving John and May feeling that the excitement was over for the evening.

But as it turned out, the UFO returned and they managed to set up a telescope and view it that way. The light was so brilliant coming from the craft, May recalls, that no additional details could be seen’ We did take a couple of pictures but they turned up overexposed. Immediately John and May telephoned the Daily News, and were told that at least 7 other reports had been received.

We even called the police – that’s how excited we were -and they told us to keep calm, that others had seen it too. According to May, all night long, John kept saying I couldn’t believe it! I can’t believe it…I’ve seen a flying saucer! As confirmation of his sighting, John wrote down what he saw and used it as part of the cover art on his Walls and Bridges album.

John had always had an interest in UFOs, May Pang points out. He even used to subscribe to a British UFO Magazine, the Flying Saucer Review. But after seeing what we saw that night, he became even more fanatical, bringing up the subject all the time.”

Astrophysicist Claims The Whole Universe Could Be One Big Alien