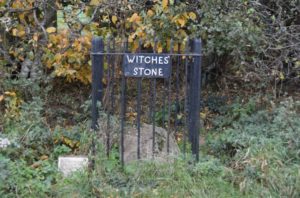 The Witches Stone marks the spot where Marion Lillie, known as the Rigwoody or Ringwoodie Witch, was burned at the stake in 1698, and also serves to commemorate the deaths of others that were executed there for witchcraft. Rigwoodie’ is an old Scottish word for thin and bony.

The site of the stone is also close by to where the Birley Tree stood, where the local Birley Court was held.

It is claimed that she was the last of those accused of witchcraft to be executed in the South of Scotland, although that may not be the case as the Rev John Martin is quoted in the Kirk Session Records (Church records) in the 18th century as saying “1698.

The session, after a long examination of witnesses, refer the case of Marion Lillie, for imprecations and supposed witchcraft, to the presbytery, who refer her for trial to the civil magistrate. Oct. 1705. 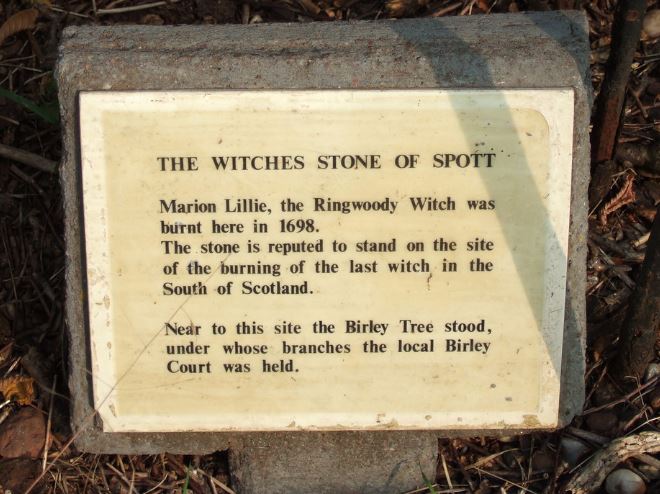 Many witches burnt on the top of Spott loan”, and if this statement is correct, it shows that other executions took place in Spott in 1705, seven years after the death of Marion Lillie in 1698.

The area around Spott was notorious for its witch burnings in the seventeenth and eighteenth centuries, and the County of East Lothian in general was infamous at this time for well publicised witch trials, with towns such as Haddington, Tranent and North Berwick also being involved.

Laying beside the Witches stone is an almost illegible information sign which says “The Witches Stone of Spott. Marion Lillie, the Ringwoody Witch was burnt here in 1698. The stone is reputed to stand on the site of the burning of the last witch in the South of Scotland. Near to this site the Birley Tree stood, under whose branches the local Birley Court was held.”

People still leave coins and gifts at the stone as a sign of respect to those executed at the site to this very day.