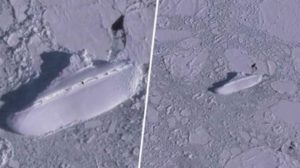 About 100 miles off the coast of Antarctica lies the latest mystery uncovered by Google Earth users, and it’s taking many on a conspiracy voyage of epic proportions.

YouTuber MrMBB333, who calls himself an Earth Watchman, shared a video depicting what appeared to be a large luxury liner on an iceberg near the South Pole.

MrMBBB333 has done some serious digging into what he thinks is evidence of a complex, complete with parking, some kind of cylinder, and a ship out there in the middle of nowhere.

“This looks like a random iceberg, right? But there’s things on this iceberg that don’t look necessarily random. It looks like it has purpose,” he said in his YouTube video.

The ice structure has a striking resemblance to a cruise liner with a line of windows. The discovery has sparked many conspiracy theories on social media, with many believing that there is something hidden in the frozen continent.

YouTuber MrMBB333, who was the first to share the news of the mysterious discovery, explained intricate details of the find in a 10-minute video.

“You look down on it and it looks like the outline of a ship. This measures 400ft long, whatever that looks like, it looks like a ship. An ice ship if you want to call it – a 400ft yacht just sitting there off the coast of Antarctica,” the YouTuber says in the video.

Although the video has received more than 55,000 views, no further verification about the find has come from authorities.