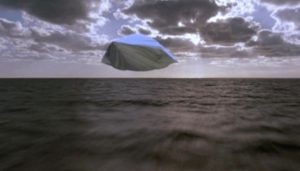 A Spanish fishing vessel – the Piñeiro Correa – set out from the rich fishing waters off Massachusetts toward the Norwegian Sea.

Registered at the port of O Morrazo in Galicia, Spain’s northwestern corner, Captain Alvaro Otero would never forget the day in which his routine was interrupted by something he would remember as one of the strangest experiences the sea had offered him: The date was 12 September 1977, and the Piñeiro Correa had already reached the Faeroe Islands.

Ship’s engineer Manuel Carballo recalls that the captain summoned the crew to the bridge at 21:00 hours to witness an extraordinary phenomenon: a structure resembling “ a large umbrella filled with unexplained lights, with a very bright light at its highest tip, issuing rounded spindles of color that faded as they fell into the ocean.”

The engineer – who made an entry in his personal log – told journalist Juan Calvo of the O Faro de Vigo newspaper in a 2009 interview that “the colors were very hard to describe” and that the main light “turned off after being visible for 20 minutes.”

The engineer further recalled that it was a clear night with a full moon and mild weather for that latitude, but that a storm broke out the minute the phenomenon was extinguished.

Throughout the entire experience, the fishing vessel’s crew had remained calm, beholding the strange phenomenon without any apprehension. Perhaps they could not sense the skipper’s growing disquiet as he realized the unknown luminous phenomenon was heading their way.

Captain Otero ordered his second in command to put the Piñeiro Correa on autopilot, and then ordered the crew below decks once more. “My own recollection,” Otero told the reporter from O Faro de Vigo, “is similar to Carballo’s, but I remember that there was a central beam of light descending straight into the sea.”

The other witnesses to the event, whose names appear in the newspaper article, kept an unspoken pact of silence among them, as they knew the phenomenon they’d seen with their own eyes was atypical.

The article notes that upon returning to their homeport at the end of the squid-fishing season, the crew contacted astronomy and navigation instructors at the Escuela Náutica Pesquera de Vigo (Nautical Fishing Academy of Vigo) for consultations.

The instructors showed them an array of possible phenomena reported at sea, but none of the slides and photos matched what they had witnessed off the Faeroe Islands. There was no photo or cine camera aboard the Piñeiro Correa with which they could have captured the phenomenon for posterity. The crewmen remain convinced that they saw “something extraterrestrial.”

But the unknown appeared to dog the fishing vessel: the Piñeiro Correa was sold and renamed Cisne Blanco (White Swan), finding itself in Chilean waters many years later. Jesús Piñero, the only crewman left aboard from the old ship’s complement, now acting as boatswain, remembers a night when the crew was called up to the bridge.

“There was something suspended above the sea with very large lights. It suddenly vanished and left a wake behind it. It wasn’t collective madness or a sea-story. Forty crewmen stood there, witnessing what is nowadays considered an unidentified flying object.”

Belief in the existence of a UFO base (or materialization point) in the Norwegian Sea, and another in the Baltic, has persisted for decades. In April 1988, a spokesperson for the Swedish Navy mentioned that his country had detected at least two dozen “mystery submarines” – a polite term for unidentified submarine objects.

In the late 1950s a man named Lorentz Jonson allegedly witnessed a cigar-shaped object, fifty meters long, with portholes and reddish lights, disgorging smaller winged objects that promptly dove into the waters of the Namsenfjorden (north of the city of Trondheim).

NATO would be confronted with the unknown objects that haunt the Norwegian Sea only a few years after the Namsenfjorden incident.

In February 1963, a Royal Navy frigate on maneuvers in those latitudes picked up an unusual contact on its radar: an object measuring 98 feet across at an elevation of 32,000 feet. No visual confirmation was obtained, but radar operators looked on in amazement as their instruments showed the object making an abrupt descent to the ocean’s surface.

One of the better-known stories regarding the presence of UFOs in the Norwegian Sea involves the 1972 detection of a mysterious object at the bottom of a fjord and proceeded to force it to surface.

In a maneuver that lasted three days, involving dozens of Norwegian and NATO surface ships, depth charges were dropped into the icy waters, in hopes of bringing the mysterious object to heel.

The astonishing result of this action was that all the electronic systems aboard the surface ship were inexplicably “knocked out”. Red-faced, the Norwegians admitted that the USO had given them the slip.