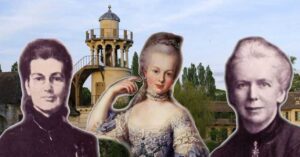 On August 10, 1901, Eleanor Jourdain and Annie Moberly, decided to visit the Versailles Palace in France. When they took the train from Paris to Versailles, they did not expect to meet Marie Antoinette.

During their visit the women saw numerous people in 18th-century costumes. At first, they assumed that the people were part of the staff who were dressed for effect or festival.

Then they were startled to see some of the costumed people vanish. This is one of the examples of an unexplained phenomena called the “Time Slip”, where people from modern era (20th century) trapped in the past.

Like all ordinary tourists, Jourdain and Moberly (both are vice-principal and principal of St. Hugh’s College in Oxford) began their tour with a visit to the long rooms and galleries of the Versailles Palace. They strolled about the grounds and wanted to visit the Petite Trianon first.

This smaller house was built by King Louis XV. Later Louis XVI of France gave the “little château” to his wife Marie Antoinette. Marie loved to spend time there in the lush days before the French Revolution. When the revolution came and the monarchy was destroyed, both Louis XVI and Marie Antoinette were executed by beheading.

Jourdain and Moberly made their way down the great steps of the palace and past the fountains. They walked as indicated in their guide book, along the central avenue until they reached the fountainhead of the pond, then they turned right.

As they passed the Grand Trianon and turned off the paved walkway onto a broad, grassy drive, the mood of the day seemed to change. They missed the path that would have taken them directly to the Petit Trianon.

Instead, they crossed it and walked up a lane leading in a different direction. As they proceeded along this route, Moberly saw a woman lean out of the window of a nearby building to shake a dust cloth.

Suddenly they found that their single path branched out into three. They were confused, and they decided they would ask the two men who were walking just ahead of them with a wheelbarrow.

They noticed that the men were wearing very strange three-cornered hats made of black velvet, but they were able to answer Jourdain’s question and direct them to the path that led to the Petit Trianon. Unfortunately, that path ended abruptly when another path intersected it at an angle and led in another direction.

The new path seemed like a dividing line between sections of a patchwork quilt; it chopped off the blue-green lawn they had been walking through. The land on the other side of the path resembled wild woodland, with tufts of wild grass and dead leaves scattered all about. They began to walk down the new path, but the environment they entered looked somewhat weird and unnatural.

Then they saw a man who was sitting with his back turned to them near the bandstand. The man also dressed in the same manner as the man that had given them the wrong directions. As they approached, the man turned toward them and they gasped at the sight of his face. His face looks scary and horrible.

They were shocked at that time, and when they turn around to avoid the man, another man called them. They were so stricken by the sight that they did not see the other man until he called to them.

The frightened women spun around to face the newcomer and composed themselves enough to ask him for directions. As he pointed the way, he spoke with a foreign accent that neither of the two teachers grasped. Suddenly the man ran off after they thanked him, disappearing into the woods. But still the pair heard the sound of his running footsteps.

Jourdain and Moberly following the direction their mysterious guide had indicated. They finally found the Petit Trianon. Rough grass like one might expect to find growing happenstance around the cottage of a French peasant in the days of Louis XVI covered the terrace around the north and west sides of the house.

They noticed a woman who was completely unaware of their presence holding a pad at arm’s length and busily sketching the scene. Jourdain could not help remarking that the woman was dressed like in a picture she remembered seeing of Marie Antoinette, complete with full skirt and wide white hat. They think there had to be some kind of historical pageant or some kind of festival in progress.

As the two women walked up the steps to the top of the terrace, the strange atmosphere of the place hung over the scene like a musty blanket. When they reached the top, they looked back at the woman with the sketch pad.

She glanced up to meet their gaze, and they saw that her face was old and lungs as she desperately sought her way back to the present. In her haste, she almost ran into a bearded giant of a man who suddenly appeared on the path in front of her. Jourdain was too tired to be frightened. Catching her breath, she simply asked for directions. The old man told her to follow the path that she was on.

Finally Jourdain and Moberly were able to find their way back and a decade later they published a book describing their strange encounter with ghosts of late-eighteenth-century France at Versailles (An Adventure, 1911), both wrote under pseudonyms.

In their book, they describe seeing buildings as they had looked in the past. Both of them concluded that they had experienced a time slip to 1789, and they had actually seen Marie Antoinette herself, sitting in the Petite Trianon garden.

In later years other people reported similar experiences at Versailles. Psychical researchers studied their reports, but no satisfactory explanations have ever been given to either support the time slip explanation or disprove it.