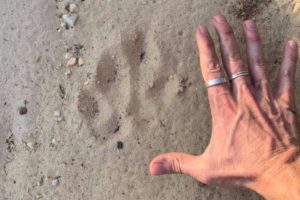 In the Blue Mountains National Wildlife Refuge, located in the Australian state of New South Wales, there is probably a huge feline animal.

This conclusion could be drawn on the basis of a very large paw print, similar in shape to a cat’s one, which was found here two weeks ago.

In Australia, large predators have not been found for a long time, and the imprint is not like the footprint of a kangaroo or a dog. All Australian wildcats are standard size and their footprints are also common – small.

The imprint was left on a strip of sand in a place called Narrow Neck in the Katumba area. There is very little open sand in this place, mainly here there are piles of stones covered with hard bushes.

Apparently this is why only one track was discovered, the “huge cat” accidentally stepped on the sand with one paw when moving over stones.

The trail was discovered by a group of three reserve employees who did their usual work. Among them was Kobe Bryant, who from childhood had heard the legends of a large panther living somewhere in these places.

He believed that all these were just tales of the natives, but now he personally saw the trace of this creature.