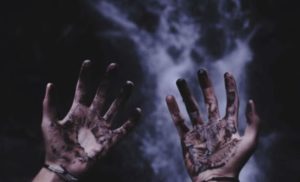 The Glico Morinaga case, also known by its official designation Metropolitan Designated Case 114, was a famous extortion case from 1984 to 1985 in Japan, primarily directed at the Japanese industrial confectioneries Ezaki Glico and Morinaga, and currently remains unsolved.

In the 1980s, the Japanese food giant Ezaki Glico was blackmailed by a mysterious group of apparent super villains, calling itself the Monster with 21 faces.

The entire case spanned 17 months from the initial kidnapping of the president of Glico to the last known communication from the prime suspect, a person or group known only as “The Monster with 21 Faces”.

At 9:00pm on 18 March 1984, two masked men wearing caps and armed with a pistol and rifle broke into the home of Katsuhisa Ezaki, the president of Glico. Prior to entering Ezaki’s house, the two men had first forced their way into the neighboring home of Ezaki’s mother, bound her and took the key to the president’s house.

Using the key to enter the main house, they then tied up Ezaki’s wife and daughter. Believing the two men were ordinary robbers, Ezaki’s wife attempted to negotiate with them for their freedom in exchange for money, but was rejected.

The two men then cut the telephone lines and stormed the bathroom, where Ezaki and his other two children were hiding. Ezaki panicked and cried for help, but was threatened that he would be killed unless he calmed down. The two men abducted Ezaki and held him captive in a warehouse.

The next morning, they called the director of the company in Takatsuki city and issued a ransom demand for 1 billion yen (about US$4.2 million at the then-current exchange rates) and 100 kilograms in gold bullion. However, three days later, on 21 March, Ezaki managed to escape from the warehouse in Ibaraki city, Osaka prefecture.

The extortion attempts against Glico did not end with the escape of Ezaki. On April 10, vehicles in the parking lot of the Ezaki Glico headquarters’ trial production building were set on fire. Then, on April 16, a plastic container containing hydrochloric acid and a threatening letter to Glico were found in Ibaraki.

On May 10, Glico began to receive letters from a person or group calling itself “The Monster with 21 Faces”, named after the villain of Edogawa Rampo’s detective novels and also translated as “The Mystery Man with the 21 Faces” and “The Phantom with 21 Faces”.

The Monster claimed to have laced Glico candies with a potassium cyanide soda. When Glico pulled its products off the shelves at great expense, resulting in a loss of more than $21 million and the laying off of 450 part-time workers, The Monster with 21 Faces threatened to place the tampered products in stores.

Following these threats, a man wearing a Yomiuri Giants baseball cap was caught placing Glico chocolate on a store shelf by a security camera. A security camera photo was made public after this incident.

Meanwhile, the Monster with 21 Faces sent letters to the media, taunting police efforts to capture the culprit(s) behind the scare. An excerpt from one such letter, written in hiragana and with an Osaka dialect, reads:

“Dear dumb police officers. Don’t tell a lie. All crimes begin with a lie as we say in Japan. Don’t you know that?”

The written challenge was also sent to Koshien police station:

“Why don’t you keep it to yourself? You seem to be at a loss. So why not let us help you? We’ll give you a clue. We entered the factory by the front gate. The typewriter we used is Panwriter. The plastic container used was a piece of street garbage. Monster with 21 faces.”

Eventually, the Monster stopped contacting Glico and, on June 26, issued a letter saying “We Forgive Glico!”. However, the Monster then turned its extortion campaign on Morinaga and the food companies Marudai Ham and House Foods Corporation.

Police did get close to the suspected mastermind of the “Monster with 21 Faces”, however. On 28 June, two days after agreeing to stop harassing Marudai in exchange for 50 million yen (about US$210,000), the “Monster” arranged for a Marudai employee to toss the ransom money onto a local train heading toward Kyoto when a white flag was displayed.

An investigator disguised as a Marudai employee and following the drop instructions of the “Monster” spotted a suspicious man observing him when he was riding a train to the drop point. The man was described as a large, well-built man wearing sunglasses, his hair cut short and permed, with “eyes like those of a fox.”

Police got a second chance at the “Fox-Eyed Man” on 14 November, when the “Monster” group attempted to rob the House Food Corporation of 100 million yen (about US$410,000) in another secret deal.

At a rest stop on the Meishin Expressway, near Otsu, investigators saw the Fox-Eyed Man, wearing a golf cap and dark glasses, but again he evaded capture. The cash delivery van they were tailing continued to head toward the drop point, where they were to drop the money in a can under a white piece of cloth.

When the delivery van reached the drop point, the white cloth was there but the can was missing. As a result, the investigative team was ordered to withdraw, believing that the drop was an evaluation by the “Monster” of police response.

However, an hour earlier, a patrol car from the local Shiga prefecture police had spotted a station wagon with its engine running and its headlights off. The station wagon was also sitting less than 50 meters from a white cloth suspended from a fence.

Unaware of the secret ransom drop, the police officer drove up to the station wagon and shone his flashlight on the driver, revealing a thin-cheeked man in his forties, wearing a golf cap over his eyes and, more telling, a wireless receiver with headphones.

Surprised by the policeman, the driver sped off, with the police car following in pursuit until the station wagon lost him.

The station wagon was later found abandoned near the Kusatsu Station and had been discovered to have been stolen earlier in Nagaokakyo in Kyoto prefecture.

Inside the abandoned car was a radio transceiver that had been eavesdropping in on radio communications between the police officers of six prefectures, including Osaka, Kyoto, and Kobe, the prefectures of the drop point. Also recovered was a vacuum cleaner, although no evidence could be traced back to the “Monster” group.

Following the blackmail campaign on House Foods, the “Monster” then turned its sights on Fujiya in December 1984. In January 1985, police released the facial composite of the “Fox-Eyed Man” to the public.

In August 1985, after continuing harassment by the “Monster with 21 Faces” and the failure to capture the “Fox-Eyed Man”, Shiga Prefecture Police Superintendent Yamamoto killed himself by self-immolation.

Before disappearing into the night like goddamned Keyser Soze, the “Monster” released a letter mocking the dead man, and announced it would stop torturing food companies, apparently taking this entire thing as some sort of childish game. The Monster’s final words to the public:

“Yamamoto of Shiga Prefecture Police died. How stupid of him! We’ve got no friends or secret hiding place in Shiga. It’s Yoshino or Shikata who should have died. What have they been doing for as long as one year and five months? Don’t let bad guys like us get away with it. There are many more fools who want to copy us. ”

Following this message, the Monster with 21 Faces was not heard from again.