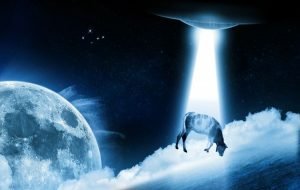 A series of mysterious killings of cattle on a farm in Argentina have raised fears that the Chupacabra may be behind these horrific murders.

According to local media reports, a curious incident occurred on the farm of the farmer Hugo Valenzuela, located near the city of Eskina. On three separate occasions in the past two months, he found cows slaughtered in an unusual way: their tongues, udders and reproductive organs were removed with uncanny precision.

“There are no signs of bleeding,” Valenzuela wonders. Longtime researchers will no doubt recognize these aspects of the case as classic signs of a cattle murder mystery. In this regard, the farmer also noted that no other animals approached the remains of the slaughtered cows and that there were no witnesses to the chilling killings, despite a neighbor who was only 1,300 feet from the scene of the attack.

“When it happens once or twice, you perceive it as something curious or strange,” the farmer reflects. However, initial bewilderment has turned to anger as he now hopes to get answers after losing his third cow in two months and resulting in significant financial damage.

Valenzuela is considering installing cameras to catch the perpetrator, or if another attack occurs.

While seasoned livestock mutilation investigators may speculate that some government conspiracy is behind the phenomenon, the farmer and others in the area point to a completely different suspect: the notorious chupacabra.

Their reasoning is that a man would not attack a cow in the way that Valenzuela’s cattle were killed, removing only some of the organs. The notorious blood-sucking cryptid was also charged with a similar string of murders in neighboring Chile last year.

While backward villagers blame the mythical Chupacabra for what is happening, this phenomenon goes far beyond the usual “terrestrial crimes” and “Chupacabra tricks” – organs are removed using high-tech tools, incisions are made on a living but immobilized animal, organs are taken from still living animals, but there is no blood, no noise.

These are not the tricks of the Chupacabra, this is the work of creatures for whom the suffering of an animal is nothing, especially since the same cases have happened to people.