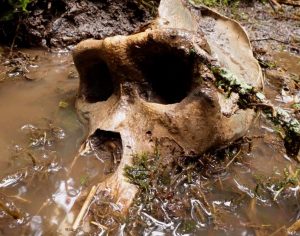 Wildlife presenter Coyote Peterson is claiming to have discovered the skull of a non-human primate in British Columbia, Canada.

Peterson is well known for his animated presentation style and captivating wildlife films, but he is not often associated with publishing material or making claims about cryptozoological creatures.

However, he recently stated in a note posted on his Facebook page that he found a huge skull of an unidentified being in British Columbia and he has photos to prove it.

“Leaking pics here before they are taken down and before government/official try to cease our footage,” he wrote. “Found a large primate skull in British Columbia – filmed it, cut the footage, releasing on @bravewilderness this weekend.

“Have kept this secret for several weeks… YES I have the skull, smuggled it thru customs and TSA and its currently in a secure location awaiting primatologist review.

“We thought it was a bear skull when we found it, I can 100% guarantee it is not. The skull was found partially buried under ground in deep back forest ravine after a massive storm in the Pac Northwest where clearly a bunch of trees and earth were disturbed. I’m sure these pics will be taken down… as will probably the video by government or state park officials… but the skull is safe.”

Whatever the case, when the footage is released over the weekend, we should learn more.

Nathaniel “Coyote” Peterson is an wildlife educator, and host of Animal Planet’s series Coyote Peterson: Brave the Wild. He is best known for his YouTube channel Brave Wilderness, which focuses on documenting and educating about animals.

Peterson has also become known for videos in which he allows himself to be stung by bugs and animals, such as the bullet ant and the executioner wasp.