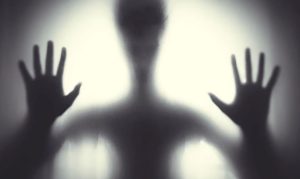 Dr. Robert Lindner (1914-1955) was born in New York City. As a child his passion was science fiction, which in those days meant H. G. Wells, “Tom Swift,” and pulp magazines like Amazing Stories.

Lindner received his Ph.D. in psychology from Cornell in 1938. He went on to a short but intense career as Freudian analyst, and wrote several riveting books about his experiences. His first book, published in 1944, was Rebel Without a Cause, which gave its title and nothing else to the famous James Dean movie.

Dr. Lindner’s most enduring work was his 1955 study The Fifty Minute Hour, a collection of five psychoanalytic cases. Lindner wrote with the power and clarity of a novelist; indeed, to protect the identity of his patients he fictionalized aspects of their lives.

The fifth and final case in The Fifty Minute Hour is called “The Jet-Propelled Couch.” Dr. Lindner got a call from a physician “at a government installation in the Southwest.” One of the scientists (Lindner says a physicist) at the government lab was exhibiting signs of psychosis, claiming he was from another planet.

Lindner gave this man the pseudonym “Kirk Allen.” One of Allen’s supervisors at the government lab noticed him writing pages and pages of hieroglyphs. When questioned about the odd symbols, Allen apologized and promised to spend more time on this planet, i.e., earth!

Because of the sensitive nature of this scientist’s work for the U.S. government, Dr. Lindner was asked to treat this physicist as soon as possible. Allen was sent off to Baltimore, where Dr. Lindner had his practice. He was then in his thirties, blond, and given to wearing seersucker suits and Panama hats.

Lindner soon learned that Allen was born in Hawaii in 1918, the son of an American naval officer, and spent much of his childhood in Polynesia. His troubles began when he was left to the care of a governess, a weird nymphomaniacal woman who seduced Allen when he was only eleven years old.

Lindner spins a classical Freudian analysis of Allen’s sexual formulation, his fears of maternal incest, etc. Allen identified strongly with the Polynesian people around him and found the behavior of the white people he knew alienating.

When slightly older he chanced upon the novels of (as Lindner says) “a highly imaginative and prolific writer… a famous English author,” Allen felt a shock of “recognition” that the novels’ hero had the same name as him.

Over time, Kirk Allen’s psychological problems took the form of believing he was an extraterrestrial, temporarily trapped in the guise of an ordinary earthman. Using the novels he read as a starting point, he began to compile lists of planets he had visited, complete with details of their geography, flora and fauna, civilizations, and politics.

This started in his teens and continued to his thirties. It didn’t seem to interfere with his college education or his subsequent career as a physicist. But by his thirties, Allen’s accumulated “alien” knowledge began to crowd out the mundane details of his real life, and his colleagues recognized the depths of his delusions for the first time.

“Kirk Allen” wasn’t simply some Burroughsian swashbuckler — he was, in his mind, the emperor of a vast galactic realm. He traveled the cosmos surveying his conquered worlds, and recorded his findings in meticulous detail.

Because of his training in math and science, Allen’s phantom worlds were far more fully realized than any in ordinary science fiction, and light-years more sophisticated than anything found in Oahspe, Urantia, or the Ummo papers.

When Kirk Allen “discovered” a planet, he worked out its orbital mechanics with the precision of, well, an Ivy League physicist. Once Dr. Lindner obtained Allen’s confidence he was shown the following documentation of Kirk Allen’s cosmos:

– An autobiography of Allen, 12,000 pages long, in 200 chapters. Appended to this were a further 2,000 pages of notes and annotations. Many of these notes were written in shorthand that Allen himself had devised.

– 82 maps, drawn to scale in full color, consisting of 23 planetary maps in four projections, 31 continents on these planets, the rest being maps of cities on those planets.

– 161 architectural drawings, to scale and extensively annotated, some in color.

– A 200 page history of the empire ruled by Kirk Allen, with 3 pages of important historical events, battles, etc.

– 44 file folders containing up to 20 pages each of memoranda on the different planets Kirk Allen ruled or visited. These had titles like “The Metabiology of the Valley Dwellers,” “The Transportation System of Seraneb,” “The Application of Unified Field Theory and the Mechanics of the Stardrive to Space Travel,” “Anthropological Studies on Srom Olma I,” “Plant Biology and Genetic Science of Srom Olma I,” and much more.

How pale and shallow the wisdom of Ummo must be compared to the delusions of a single educated earthman!

Dr. Lindner was almost overwhelmed by the sheer volume of Allen’s delusions. He had Allen submit to extensive physical and neurological tests, all of which came back normal. Allen’s problem was entirely mental, and he developed curiously familiar theories to account for his presence on earth.

A reader of the works of Charles Fort, Allen decided he had been teleported to earth, and that undefined “psychic” organs in his body allowed him to return (at least astrally) to his home galaxy whenever he wished. In another context Kirk Allen might have become a famous UFO contactee, the founder of a cult, or at least the center of a large controversy.

Imagine, government physicist, Ivy League graduate, the extraterrestrial among us — what kind of impact would Kirk Allen have had if he had come to the attention the gullible public instead of Dr. Lindner?

Lindner’s psychoanalysis of Kirk Allen took the form of going through the myriad details of his delusion, searching for inconsistencies that might shock Allen back to reality. There weren’t many.

Allen’s galaxy was measured in units called “ecapalim,” equal to one and five-sixteenths miles. He produced calculations of orbits and planetary sizes in this bizarre fraction, converting them to miles for Dr. Lindner’s benefit.

Eventually the strain of such scrutiny took the escapism out of Allen’s delusions, and they lost value for him. He abandoned them, but kept up the pretense for Dr. Lindner for some time, just to humor his inquisitive therapist! The ironic fact was, by the end of his treatment, Allen’s fantasies had ensnared Lindner, a science fiction fan from way back. Allen eventually confessed that he no longer believed in his own delusions, and that he had pretended to for weeks just to satisfy Dr. Lindner.

Kirk Allen was cured of his outer space fantasy, and his case illustrates forcefully the vast creative power of the human mind. People who believe in channeled wisdom, in the revelations of the Space Brothers, often challenge skeptics by saying, “How could an ordinary person make up such strange stuff? It must be true — where else could such details come from?”

The truth is, as Kirk Allen demonstrates, unless the alleged revelations contain knowledge totally outside the realm of human understanding (say, a breakthrough in science or medicine), they can only come from the mind of the revealer. Human imagination consists of infinite space, and many universes may exist in a single cranium. Look there for answers first, before you raise your sights to the sky.