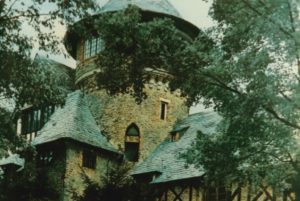 Everyone has dreamed at one point or another of the building or living in a castle as royalty of bygone eras did.

In 1923, a wealthy New York advertising executive named Bill Beaty built Beaty (Pharelock) Castle for his wife, Sarah. In 1930, they moved into it with their four children before construction was complete. Sadly, he would never see the completion of his dream.

Bill Beatty died of the flu in 1930, just as his mansion was getting finished. And since then, Bill Beatty has reportedly been staying and overlooking his famous castle.

With the final preparations already in place, the construction fell to Sarah who had the house completed five years afterward. But as she found herself living in the lonely corridors of a massive palace without her beloved Bill, she vowed to never remarry.

Instead she raised her four children on her own. When Sarah moved out of the house in 1941, the old house was converted into a boy’s school. No signs of the paranormal arose for several decades until 1972 when the house came under the care of two new owners – Don and Carol Burlingame.

As they began making alterations to the structure of the house, something very peculiar began to happen.

Amid the remodeling during hours when no one was working on the house the sounds of construction could still be heard. Don and Carol would wake up in the middle of the night to hear deafening but regular beating on the walls like someone was trying to smash it with a hammer.

On one occasion, they planned to go out for a drive. Carol liked to get fresh air in the house, so she left the upstairs casement windows open. While they were out, it started raining. They expected to return to open windows and a wet house.

“We came home, and all of the casement windows, which opened from the inside, were closed and latched. There wasn’t a drop of rain in the house,” she recalls. She believed that the ghost, the castle’s creator, Bill Beaty, had closed them and kept the place dry.

As the days went on, the couple living there eventually would come to witness a number of paranormal phenomena. Objects would fly from shelves in the kitchen, people would suddenly feel a presence in the room that couldn’t be there, the couple heard sounds all throughout their presence in the old house, and everything else normally associated with ghosts seemed ripe to happen at any moment.

When the Burlingames delved into the castle’s history, they met seventy-eight-year-old Eugene Melville, who worked for Bill’s wife, Sarah, from 1933 to 1937. He knew it was supposed to be haunted because of a ghostly encounter he had in 1934, three years after Bill’s death.

He was helping Sarah search for a bracelet that had been lost during a family gathering. Suddenly, they looked up and saw Bill on the balcony: “It was a figure of a man standing there. It didn’t stay long for me to examine it very good. It was gone just like that. It was scary. It frightened the daylights out of me. I just never wanted to go on that balcony again. I passed by it, but to get me in there and to stand there…oh, forget it. I wouldn’t go in there,” he remarks.

Eventually the couple came to learn to live with the paranormal presence of Bill Beatty, and even came to consider him a part of the family.

Carol decided to have a conversation with Bill. She told him that he could stay in the castle as long as he doesn’t let himself be seen by her. So far, he had kept that promise. In his routine of making himself known, she has observed and seen him moving things.

In 1991, after two decades in the castle, the Burlingames moved away. As far as they know, the ghost of Bill Beaty stayed behind.

It’s always sad when someone dies just before their dream is realized. But as Bill Beatty showed us all in this account, even the end of a dream cannot always be determined simply by life and death.

And some people will prove more resilient than others when it comes to living out those dreams. For Bill and the couple involved in this account, we hope your dream never dies.