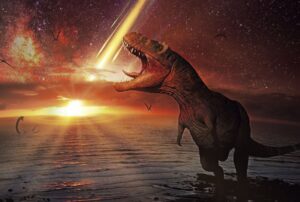 Scientists believe that animals that inhabited our planet millions of years ago could have been thrown into space by an asteroid impact. It is possible, experts say, that their fragments could have reached even Mars, reports “Daily Star”.

This incredible hypothesis was presented in Peter Brannen’s book “The Ends of the World: Volcanic Apocalypses, Lethal Oceans, and Our Quest to Understand Earth’s Past Mass Extinctions.”

The researcher believes that dinosaurs were to some extent ahead of humans by several million years and were on the Red Planet earlier. However, they were all already dead when they were in low earth orbit.

About 66 million years ago, the asteroid Chicxulub collided with our planet and caused catastrophic earthquakes, tsunamis and volcanic eruptions.

In his book, Brannen talks about what happened when an asteroid hit the Yucatan Peninsula (Mexico).

A stone larger than Everest, moving at a speed twenty times faster than a bullet, collided with the Earth.

He also explains that the meteor that hit Earth was traveling at such tremendous speed that “as the asteroid collided with the earth, in the sky above it where there should have been air, the rock had punched a hole of outer space vacuum in the atmosphere.”

All this happened in just a few seconds. Further investigation showed that the celestial body threw life on Mars and the moons of Jupiter.

The author of another study, Rachel Worth from the University of Pennsylvania, said: “We find that rock capable of carrying life has likely transferred from both Earth and Mars to all of the terrestrial planets in the solar system and Jupiter.”

“Any missions to search for life on Titan or the moons of Jupiter will have to consider whether biological material is of independent origin, or another branch in Earth’s family tree.”