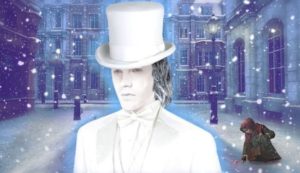 Many a tale get reupholstered in its retelling, especially ghost stories, but the following one, is, as far as I can ascertain, composed of nothing but plain facts.

Liverpool was the godmother to little Mary Pepper. She was now aged 7 and had been looked after by people of all walks of life since she was a foundling.

On this early raw morning of Christmas Eve, 1887, she had left the shelter of a derelict crumbling house somewhere amid the warrens of alleyways round by Hackins Hey to go in search of anything; lumps of coal that had fallen off wagons, wood, and who knows – even someone’s lost coin.

She usually begged for stale bread at the Dale Street bakery and sometimes if she hung around the sweetshop long enough, Mr Mallard would beckon her in and give her a bag of boiled sweets or a piece of cinder toffee. On this morning, Mary was following a hopping robin down Crosshall Street when she saw the ghost, and she wasn’t scared because she’d seen so many.

The child was undoubtedly what we would now term as psychic. He was tall and thin and everything he wore was white as snow, from his top hat and silvery-white hair to his boots, and even his sad face was chalk-white.

He reached out with both hands towards Mary and made a groaning sound as he approached, walking through the snow without leaving a print.

This was the unimpressive debut of Henry Silver, a man who had been dead since the 1860s. ‘Aren’t you afraid of me, child?’ he asked, with annoyance in his pink eyes – the only part of him with some colour.

‘No, you’re nothing – just a sad ghost,’ Mary said, and sighed as the robin flew away.

‘I am not nothing!’ cried Mr Silver, eyes bulging with rage, ‘I am an evil spirit!’

‘Bye bye,’ Mary said, and she turned and walked away but the ghost flew after her and through the girl and after trying various ways to scare her he followed her to her home, through a hole in a wall to a damp cellar where a candle stub flickered. He told Mary his story.

Long ago he had played jokes on couples, causing them to split up by the planting of forged love letters – until a sweetheart who thought she had been cheated on jumped in the Mersey.

He was then visited by a relative of the suicide – a gypsy woman – who cursed him to stay cold – as he was so cold-hearted. Silver’s physician did everything he could but Henry died of hypothermia – in summer.

‘I’m too proud! No!’ Silver replied, sobbing, but Mary convinced him to go and led him to the church next to St George’s Hall.

Gingerly the ghost went into the church and was gone for some time, but eventually he came out – and his topper was black and his suit was brown, and he had rosy cheeks. He hugged Mary, said ‘Thank you little one,’ and vanished.

Mary Pepper survived many more winters and at 15 she was adopted and taken to America, where she later married a rich oil magnate.

Carl Pruitt – The Legend Of The Vengeful Ghost