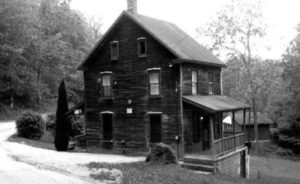 It is difficult to imagine witchcraft trials in the 20th century, however, in 1920s York County, Pennsylvania was still steeped in old Dutch mysticism, a superstition that lead to a brutal murder which still haunts the area.

The day before Thanksgiving in 1928 farmer Nelson Rehmeyer, was killed in his own home, the house which is now known as The Nelson Rehmeyer hex murder house.

Pow-wowing was a form of ritual folk magic practiced by the Pennsylvania Dutch. It was rooted in a book published in 1820 by German author John George Hohman. The Long Lost Friend was a “collection of mysterious arts and remedies for man as well as animals.”

It contained spells, remedies, recipes and talismans to cure ailments and domestic troubles. It became entwined with folk traditions in Pennsylvania when it was translated to English and renamed Pow-Wows.

When Nelson Rehmeyer’s neighbor, 30 year old John Blymire began to suspect he was cursed after years of illness and bad luck. For as long as he could remember, the years had not been good to him, his wife had left him, two of his three children had died, he had great difficulty in staying regularly employed, and he wandered aimlessly about the streets of York and the surrounding countryside, with the witches he imagined always in pursuit.

He consulted a witch in Marietta in Lancaster County, called Nellie Noll, who was known as the River Witch of Marietta, and followed her advice when she instructed him to find and burn Rehmeyer’s copy of Pow-Wows, the source of his spells, and bury a lock of the man’s hair.

When Blymire, along with young accomplices John Curry (14) and Wilbert Hess (18), broke into Rehmeyer’s home, they were unable to find the book. Rather, they bludgeoned Rehmeyer, bound him to a chair and set him on fire in a desperate attempt to lift the curse.

Interestingly, Rehmeyer’s body did not completely burn despite being doused in kerosene. After all that, they fled the crime scene. Rehmeyer’s body was discovered about a day later, on Thanksgiving Day, when his neighbours noticed his animals on his farm were unfed.

Nelson Rehmeyer left behind a wife and two children. He was given a Christian burial and laid to rest at Sadler’s Church Cemetery. Blymyer, Hess and Curry were all arrested and the three were all convicted and given life sentences. In testimony, the role of witchcraft, Pow-wowing and spells all came out, and journalists from all over who covered the trial, made sure it became international news.

The house where he was murdered still stands on Rehmeyer’s Hollow Road. Many locals believe it to be haunted.

Today the house is owned and maintained by Rehmeyer’s great grandson. You can tour the house and see artefacts that belonged to Rehmeyer, including his clock which apparently stopped at 12:01 am, the time of death determined by the coroner.