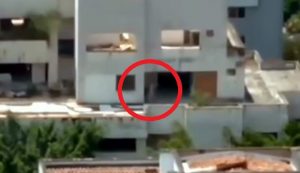 A very mysterious video captured on February 22 in the Colombian city of Medellin, is currently being distributed on internet, riveting the attention of researchers of supernatural phenomena.

The local authorities demolished an 8-storey mansion that once belonged to the famous drug lord Pablo Escobar, and an occasional eyewitness unexpectedly noticed something strange in the building just before the explosion thundered and the building collapsed on the ground.

A whitish figure, suspiciously similar to a man, flashed through the window of the house and soared upwards, after which the former residence of the infamous criminal ceased to exist. The mysterious silhouette seemed to panic and tossed around the building before the upcoming explosion.

When the mansion, together with the anomaly inside, disappeared into massive clouds of smoke, the author of the video realized that he was obliged to share his discovery with Internet users. Unusual shots quickly became viral and scattered across a variety of entertainment portals.

As you might guess, many thought that it was a ghost of the cocaine magnate Pablo Escobar. Perhaps his phantom wished to visit his former place of residence for the last time.

Skeptics are expectedly talking about a bunch of dust raised by the wind, a glare of light in the camera lens and similar phenomena, which, they say, are easy to take for something mystical and inexplicable.

What do you think? Was it real paranormal evidence or a bizarre illusion? Watch the video and draw conclusions …