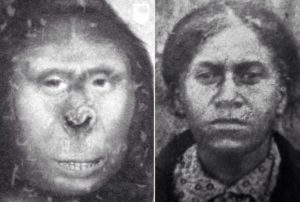 In the mid-eighteenth century, hunters in the Ochamchir region of Georgia (a Province of Russia on the edge of the Black sea) captured a ‘wild woman’ who had ape-like features, a massive bosom, thick arms, legs, and fingers, and was covered with hair.

This ‘wild woman’, named Zana by her captors, was so violent at first that she had to spend many years in a cage with food being tossed to her. Eventually, she was domesticated and would perform simple tasks, like grinding corn. She had an incredible endurance against cold, and couldn’t stand to be in a heated room.

Zana enjoyed gorging herself on grapes from the vine, and also had a weakness for wines, often drinking so heavily she would sleep for hours. As Colin Wilson points out in The Encyclopedia of Unsolved Mysteries, this is likely how she became the mother of many children to different fathers.

These children usually died when she tried to wash them in the freezing river. The villagers started to take her children away from her and raise them as their own; unlike their mother, the children developed the ability to communicate as well as any other villager.

Zana died in the village about 1890; the youngest of her children died in 1954. Her story was researched by Professor Porchnev who interviewed many old people (one as old as a hundred and five) who remembered Zana, as well as two of her grandchildren.

The grandchildren had dark skin, and the grandson, named Shalikula, had jaws so powerful that he could lift a chair with a man sitting in it. It is believed that Zana may have somehow been a surviving member a previous evolutionary state of man.

She was given the name Zana by Russian researchers after she was captured naked and living in the wilderness by hunters in the Ochamchir region of Georgia in the year 1850. From all accounts, she was the closest thing to a live, captured version of a Bigfoot creature on record. Some thought she might have been a throwback to the Neanderthal.

Zana was described as something between a human and an ape. She showed some degree of intelligence after some time in captivity, although she never developed the ability to speak or adopt social skills. Some said she was capable of doing hard labor such as grinding grain and farm work, but little more. 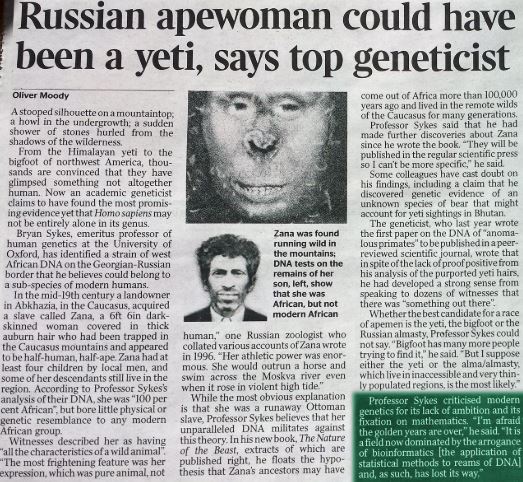 Even though Zana lived at a time when cameras were around, we could find no surviving photographs of either Zana, or any of the four children she reportedly bore following her capture. The children were sired by various unidentified males, and were said to have been relatively normal humans even though they all possessed some of the physical characteristics of their mother.

Her general description was that she was a large hairy humanoid with thick arms, legs and fingers, a “massive bosom” and large hips. Her skin was black or a dark gray in color, and the hair on her body was a reddish-black. She could splay the toes on her feet.

Her face was broad, with high cheekbones, a flat broad nose with turned-out nostrils, a muzzle-like jaw, wide mouth and large teeth. She had a low forehead and her eyes were a reddish tinge.

It was said that at the time of her capture, Zana was a wild creature. After being brought into captivity, she had to be kept caged for the first few years until her behavior became mellowed and she could be taught to perform domestic tasks and behave herself to some degree while in society.

Among her biggest problems, however, was an unwillingness to wear clothing. Zana lived as a nude and hairy beast in the wild, and throughout her life in human society, they said she resisted having to be dressed.

That Zana existed appears to be well established. She was not a native myth. Her two sons and two daughters, and their offspring, many of whom still live in Russia, attest to this. The problem for historians and anthropologists has been just what was she, and from where did she spring?

That she could have human children after copulating with humans proved that she was not an animal. Some suggested that she may have been a genetic throwback to the Neanderthal, a humanoid that some believe cross bred with the homo sapiens, which was the reason they went extinct.

Another theory was that Zana was a deformed baby who was left in the wilderness by her mother and somehow survived to be a feral creature at the time of her capture.

Russian zoologist Alexander Mashkovtsev suggested that Zana was a relict hominoid called Abnauayu, a legendary “Wildman of the forest” said to live in certain areas of the Caucasus Mountains. These creatures have reportedly been observed, and even captured more than once.

A Russian doctor, V. S. Karapetian, reportedly examined an Abnauayu in 1941 which was described as a hairy human-like creature that was incapable of speech and harbored lice. Are they proof of the mythological “Bigfoot” monster?

If Mashkovtsev is correct, Zana thus became the most known Abnauayu to have ever been captured and brought into human captivity.

As the story was told, Zana put up a violent fight when the hunters surrounded and captured her. They reportedly hit her with cudgels, gagged her mough with felt and shackled her legs to a log to hold her down.

Then she was literally carried back into a so-called “civilized” society where she was sold like livestock, passing first to D. M. Achba, the titular head of the Zaadan region. After this, she became the property of a nobleman, Edgi Genaba, who carried her off still shackled and chain to his estate in the town of Tkhina on the Mokva River.

Zana was first lodged in a strong cage where she acted like a wild beast. Her food was thrown to her since no one dared to enter the enclosure. She dug a hold in the ground where she slept.

After some three years in this environment, they said Zana tamed down and was moved to a wattle-fence enclosure under an awning near the house. At first, she was tethered, but later allowed to go free and wander about. Like any tamed animal, she never went far from the place where she received food.

Villagers sometimes teased her by throwing sticks at her through the fence. Zana would snatch them, bare her teeth and howl. She never spoke a word, but merely made animal-like sounds. She responded to her name, however, and was taught to carry out commands given to her by Genaba.

She displayed great strength and could perform many tasks that were above the ability of even the most powerful of men. Zana died and was buried at Tkhina sometime in the 1880s or 1890s. The exact location of her grave has since been lost.

Afraid of the Dark: The Chilling Murder of Jessica Lunsford