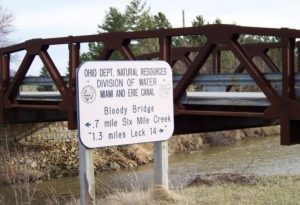 On a section of Route 66 that crosses the Miami and Erie Canal between Spencerville and St. Marys there is a bridge with a terrible history.

It was 1854 and two young friends had secured gainful employment as mule drivers for the canal boats. Jack Billings worked on a boat named “Daisy” and Bill Jones for the “Minnie Warren”, a vessel named after the captain’s beautiful daughter.

Both men were head over heels for the later canal boat’s namesake, but there could be only one suitor and before long Jack Billings began to emerge as a clear victor in the contest for Minnie Warren’s heart.

Losing to Jack began to enrage Bill. It didn’t help when Jack and Minnie would do disgusting little things like blowing each other kisses as they passed each other along the canals.

In June of 1854 both the “Daisy” and the “Minnie Warren” were docked in the tiny village of Kossuth. Jack and Minnie decided to use the free evening to go out for dinner and attend a party.

As they were returning late that night and enraged, crazed and probably drunk Bill Jones jumped out from behind the pillar of a bridge. Before they could comprehend what was happening Bill swung his axe and decapitated Jack Billings.

Legend says that after belting out a heart wrenching scream, Minnie fell into the water – though how anyone can be sure she wasn’t pushed, remains a mystery. Regardless of how she wound up in the drink, her lifeless body was pulled from the water later that night.

Almost immediately after the murder people began claiming that they encountered a headless figure on the bridge or that, if they were brave enough to peer over the side, they would see Minnie staring back at them from the water below.

It probably didn’t help that the splatter of Jack’s blood stained the bridge and was visible until the 1890s.

What became of Bill Jones? He was never seen again and his whereabouts remained a mystery until a skeleton was found at the bottom of a nearby well 4 years later. We’ll never know whether put himself there or was delivered unwillingly in an act of street justice.

The bridge was replaced quite some time ago, but the legend remains and the new structure retains the name “Bloody Bridge”. In 1976 the Auglaize County Historical Society even erected a plaque commemorating the legend of the bridge.