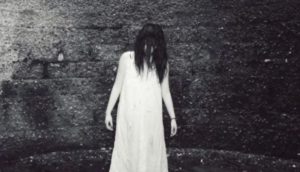 The idea of living in a castle is a romantic one many people aspire toward and live with focusing on the idyllic life of royalty.

But in the case of one family who lived in the now infamous Baldoon Castle, not every family living in a place intended for royalty has a fairy tale ending. Such is the story of the now infamous haunted place in Bladnoch, Scotland.

Visitors to the castle at late hours of the night have noted seeing a woman in a white nightgown drenched in blood as she wanders aimlessly like a – well – lost soul through the grounds.

Wailing at the loss of her life’s aspirations, she seems a woman trapped between realms unable to shake the horrifying and tragic end that met her in her final days. And though the place is now filled with life, the human beings that are drawn to this place now are drawn out of a fascination with death.

And the only life that dwells there after hours is the ivy that crawls up the stony walls and clings to the castle like the ghost of Janet Dalrymple, the woman whose memory can still be heard shrieking in the dead of night ever since that tragic night in the summer of 1669.

It all started when Janet first fell in love with a pauper while she was betrothed to another man in an arranged marriage. Arranged marriages were common practice in Scotland in those days, and so when she voiced her complaints over the arrangement, her cries fell on deaf ears.

Instead, she soon found herself standing at the altar in Carsecleugh Castle, owned by her parents. But unlike so many who had gone to the altar before her, she had aspirations toward love rather than simple political maneuvering to benefit her family.

It is said that she looked pensively to David Dunbar, her husband to be during the ceremony before tragically saying “I do,” and sealing her fate.

That night during the honeymoon, a heated argument broke out in the bridal chamber followed by a scream. Breaking down the door, Janet’s parents found Dunbar clutching his throat and lying on the floor, blood streaming from a stab wound on the side of his body.

Janet was found huddled in the corner. It’s unclear just who stabbed Dunbar that night, and the mystery is only deepened by the fact that he shortly recovered thereafter. With the lack of medical science at the time, infections from stab wounds were common and often resulted in death. But Dunbar somehow survived.

Janet was found dead after he recovered, and though the townspeople soon became aware of the tragic story, Dunbar was never tried for murder. In fact, no one knows precisely how she died.

They say she was driven to madness by the injustice of her circumstance. Still, others say she was oppressed by otherworldly forces that drove her to insanity. But while we do not know just how she died or why, tragically she was never reunited with her beloved Archibald, instead resorting to a life and even death of mourning.