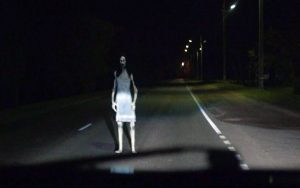 Stocksbridge A616 bypass is haunted by a monk’s ghost and spectral children at play. At one time, it was called Killer Road, due to numerous fatalities.

Stocksbridge, northwest of Sheffield, England, lies in a Pennine valley. According to legend, a disillusioned former Hunshelf Priory monk’s ghost haunts the site and has appeared in vehicles. Specters of children who fell down pit shafts in the valley have been sighted. Before being redesigned, Stocksbridge A616 bypass was called the Killer Road.

September 8, 1987: Two security guards, employed by the McAlpine builders to patrol the area and guard building materials, hysterically called Peter Owens, their boss. When Owens met the men, they were still freaked out.

He questioned them and was told about eerie incidents that began around 12.30 AM the previous night. The guards watched children who were skipping about, garbed in old-fashioned clothing. The men got out of their Land Rover and walked toward the children, but when they got to the site where they were, the children had vanished and there were no footprints left in the mud.

When the guards mentioned the incident to other workers, some of them said that they heard children’s voices during the night. The guards’ perplexity turned into fear before they called Owens. They had been driving on Pearoyd Lane towards the A616 bypass bridge when they saw a male form that resembled a monk on the bridge. He vanished when their headlight beams caught him. 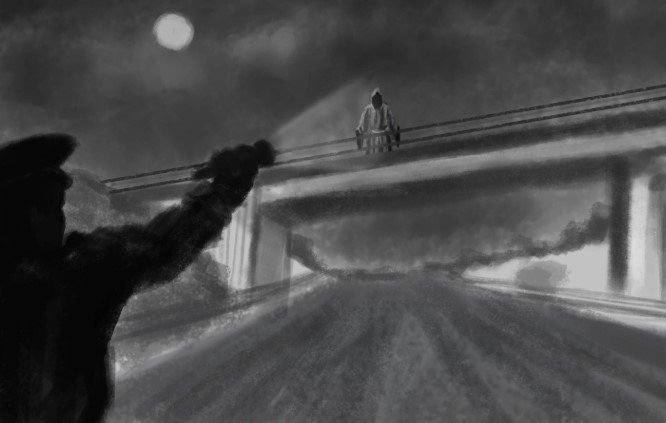 Owens was convinced the guards were sincere and called the Deepcar Police Station. The police officer who responded to the call, PC Dick Ellis, laughed and suggested they call a priest because this wasn’t a police matter.

Later that day, priest Stuart Brindley, called Ellis and asked if he could send someone to help him calm the security guards who were at his church. The priest told him that they demanded an exorcism be performed in the Stocksbridge bypass area. Ellis and former Special Constable John Beet were assigned to investigate.

September 11, 1987: Ellis and Beet were skeptical about the guards’ experience, believed they were hysterical and thought their story was one of the most amusing they had heard until they experienced paranormal incidents. When they were driving on Pearoyd Road, they saw the spectral children playing near the partially constructed A616 bypass.

It was a warm evening, so Ellis and Beet sat in their car, with windows rolled down, facing the bridge. Suddenly it grew cold. Ellis told Beet that he felt an odd sensation, as if someone had walked over his grave and asked Beet if he had felt something. Then, Ellis felt a presence by his side. He turned his head and saw a dark-clothed torso pushing against his door.

The specter vanished and re-appeared by Beet’s side. It disappeared as Ellis exited the car. He walked around the vehicle, looked underneath and found nothing. When he entered the car and tried to start it, it didn’t turn on until the third try.

Ellis drove to the construction area, where he parked and radioed the station to announce their location. There was a loud bang on the back of the car, which Ellis said sounded like it was hit with a pick axe handle or a baseball.

He got out of the car again and found nothing. After he bolted into the car, it was hit again. The noise reverberated, rocking the vehicle up and down. When Ellis started the car, it was struck again. He sped back to Deepcar station where their report was entered into police records.

This stretch of highway was originally part of the cancelled M67 Trans Pennine Motorway before it was downgraded to a dual roadway, then a single highway, with crawler lanes, completed in 1989. Reckless driving and speeding caused many deaths until the road had improved signs and specs cameras, that measure average speeds over a designated distance, were installed.

Haunted Stocksbridge A616 Bypass has Company

One writer referred to Haunted Stocksbridge A616 bypass as the scariest ghost story in the United Kingdom. Annan Road, A75 Kinmount Straight, is said to be Scotland’s most haunted byway and is equally as scary. People have experienced otherworldly incidents and some are afraid to drive on that road after dark.

Borley Rectory, said to have been England’s most haunted house, was built on the site of an old Benedictine Monastery. Phenomena included sounds of spectral footsteps and whispers, doorbells ringing by themselves, eerie lights appearing invisible hands tossing stones and other poltergeist activity. There were specters of a girl dressed in white, a headless man, a former owner and a sorrowful nun. A phantom carriage has been sighted and heard.

Recently, England’s Thorpe Park made headlines when its managers moved the Storm Surge ride’s planned location during its construction because of the ghost of a headless monk and other paranormal phenomena. Original plans were to build the ride in the vicinity of the Monk’s Walk, an old pathway that has linked Chertsey Abbey’s ruins to Thorpe Church since 666 CE.

Some people have discovered that, when they renovate, build on or restore sites, there’s new or additional paranormal activity. Perhaps, America’s White House is the best known one. First Lady Dolley Madison planted the original Rose Garden.

Her ghost has been encountered on White House grounds. When Mrs. Woodrow Wilson decided to eradicate the garden, Dolley’s apparition appeared to the workmen removing it and scolded them, making them flee.