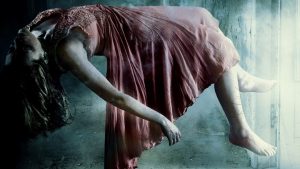 * Names have been changed to protect the innocent from future hauntings.

Last year was my freshman year at an unnamed university. My suspicions about my “roommate” began on the first day that I and my two suitemates, Lola* and Gerty* met Iris*. When we first laid eyes on her ghostly pallor, we knew something wasn’t right (we were, after all, in the sunny lands of south Texas..who doesn’t tan here?!).

Another strange indication was the closetful of lingerie that belonged to days of yore….the silky, long, flowing kind that revealed her skeletal frame. Although she spent no more than two nights in the room with me during the first semester, I never saw her without her lurking boyfriend/bodyguard type.

She would sit in his lap as though channeling energy through his massive frame into her own frail, sickly body, surrounded by Kleenex. Once I woke up to find her family surrounding her bed, somberly staring into her pale face, while she coughed feebly.

Her mother wiped a single tear from her own face, and by the time I left for class the family had left and she was lying quietly alone. I only saw her once the entire second semester. My RA never quite asked where my roommate was, which I thought was weird (but then my RA was drunk a lot).

My suitemates once found a note on their door from her, something about her missing cookies, but they couldn’t figure out what she wanted. They bought her some cookies and left them on her bed, but they stayed on the bed for about a week then they were gone.

Lola awoke one night to hear music coming from my room and Iris was dancing (I was gone for the weekend) to lively Salsa music. Gerty, who had fallen asleep next to a box of Twinkies (half-eaten), never heard anything. But Lola peeked into the room to see Iris, clad in a scrap of red lingerie, dancing madly in front of a bowl of what Lola thought was guacamole, and a clock that said 3 a.m.

Anyway, those were just some strange details about my “roommate.” The weirdest thing happened at the beginning of this semester. While going through my university’s archives for a project on student deaths throughout the history of the university, I found (to my fright) a picture of my old roommate in the archives!

I thought it was a mistake at first because her hair was up and she was wearing a dress with a really big collar,so it didn’t completely look like her, but after showing it to Lola and Gertie, they agreed it had to be Iris! Apparently, she had died IN MY OLD ROOM the second year that the school was founded here (about a hundred years ago).

The story wasn’t very explicit, but it said something like, “Student found in (said dorm room) due to complications from consumption.”

I was really freaked out at that point, but to make matters worse, I can’t seem to find any physical evidence of her existence anywhere! We did some snooping in student records and never found her file! Also, the only picture of her I have has disappeared from my album! And I saw my old RA a few weeks later, who asked me if I missed having a single (she was probably drunk though).

My suitemates and I seem to be the only people who ever saw her. I now remember that I never got calls from her parents or anything, only from this one guy who always wore a Scottish beret, and from her boyfriend. I have always wondered about her…and no one on campus remembers having ever seen her. Thank goodness my roommate this year is flesh-and-blood!

What Do Ghosts Know? Do They Have Choices?