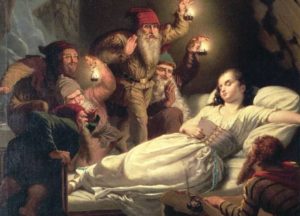 When you consider that Snow White is filled with all the tell-tale signs of a made up fairy tale fantasy, it’s actually quite strange to consider that it could actually be based upon a real person.

Snow White was based on Margarete Von Waldeck, a 16th century Bavarian noblewoman according to German scholar Eckhard Sander who, in 1994, wrote Schneewittchen: Marchen oder Wahrheit? which translates to Snow White: Is It a Fairy Tale?

Strikingly beautiful by all accounts, sixteen year old Margarete was forced by her stepmother, Katharina of Hatzfeld to move to Wildungen, Brussels in 1549. There, she caught the eye of Prince Philip II of Spain, and became his lover, much to her stepmother’s dismay.

The thought of Margarete being a princess was apparently unbearable to her meddling stepmother (who, by all accounts, hated her) as well as Philip’s father, the king of Spain, who saw a marriage between the two as politically disadvantageous.

Therefore, Spanish agents plotted to end the affair permanently, by poisoning the young beauty. The reasoning behind the using of poison to murder Margaret was an attempt to play off her death as illness and not a murder plot. Sander also cited evidence to his claim, like the will von Waldeck wrote shortly before her death, which was penned with frenzied handwriting showing the symptoms of the effects of dying from poison.

While it is unknown whether von Waldeck was killed by poison or who did it if she was murdered, it was not her stepmother as the traditional story reads since she was dead before the death of her stepdaughter.

Whilst the story of Snow White isnt and exact parallel of the life of Margarete von Waldeck, it would appear to be a derivative of the fairy tale, where a stepmother is jealous of the beauty of her stepdaughter and orders her to be killed by a huntsman and is then poisoned by her.

Sander pointed out other similarities between the fictional Snow White and von Waldeck, one being the poison apple. Sander believes the apple was added to the story of von Waldeck after a historical event in German history where a man was arrested for giving children who he believed stole from him apples containing poison.

Interestingly enough, the similarities don’t stop there… Margarete also grew up in Bad Wildungen, where her brother owned a copper mine worked by small children, severely stunted by their terrible working conditions and starvation. Since it was a different time and this wasn’t considered bad enough, they called these children “dwarfs” (although they probably didn’t sing happy little songs).

For many people the traditional components of the Brothers Grimm version of Snow White is inextricably linked to the life of Margarete von Waldeck.