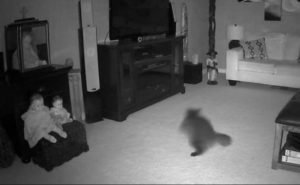 A homeowner is afraid to enter his own basement after he caught something strange on a security camera, reports mirror.co.uk.

Kathy Gallinger, 45, originally from Quinte West in Ontario, Canada, first moved into her home back in October 2018 and quickly began to encounter unusual phenomena such as objects moving on their own.

Kathy said: “We started noticing little things right away when we moved in.

“I’d get up in the morning and two or three kitchen cupboards would be open and back then we didn’t even have security cameras set up and I’d blame my husband and would be like ‘you got up in the night and didn’t shut these cabinets’ and he was like ‘no I wasn’t up in the night’.

“Or I’d look for my hairbrush which I keep in the upstairs bathroom and find it in our basement and my daughter was like ‘I didn’t take the brush down there’.”

However, one incident scared her more than any other. In an effort to capture evidence of the phenomenon, Kathy set up a webcam in her basement. Indeed, she soon recorded evidence that something strange was going on.

In the footage below, a dark mist can be seen coming from her mother’s old dolls and frightening her cat, who appears to be reacting to the phenomenon by running away. The dolls themselves date from the 1950s.

“I think my house must be haunted. I love this house,” Katie said.

“We can only think about moving if it becomes violent or something could harm either of us.”

The mum-of-one says her daughter Jayden Carveth, 20, was the one to convince her to share the ghostly goings-on at her house via TikTok, where she has since clocked up more than 600,000 followers and likes.

Kathy said: “My TikTok followers asked to put the camera in with the dolls overnight in the basement as that’s where most of the activity is. The cat was down there and my daughter’s bedroom is down there and she said the cat ran to her door.

“She heard him outside and let him in and he was clearly afraid of something. She said ‘mum, you might want to check those cameras because the cat’s crazy scared'”.

So, does this footage represent genuine evidence of the paranormal, or is there something else going on? You decide.