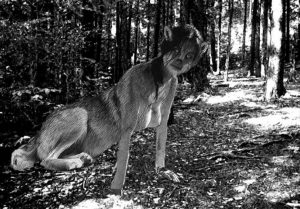 In the first couple of weeks of April 1971, residents of the Mobile Alabama suburbs of Port City and Plateau had encounters with a strange and bizarre creature. The half wolf, half woman creature so frightened the citizens of Mobile that people began calling The Mobile Register to report the sightings.

On April 8, 1971, the newspaper reported the phenomenon, complete with a drawing of the creature conceived by a newspaper illustrator.

Witnesses described the creature as “pretty and hairy,” and “the top half was a woman and the bottom was a wolf.

After the initial report in the Mobile Register, the newspaper received over 50 calls of encounters and sightings over the following week. Citizens were chased by the creature, stalked, and saw it roaming in their backyards. Witnesses described it as having the upper body of a beautiful woman and the back quarters of a wolf, and that it ran on all fours, as a wolf would. Most of the sightings took place at night by terrified witnesses.

No one was hurt or assaulted, and the police took the investigation seriously because of the sheer volume of reported sightings, although officers would not make an official comment, they did investigate to determine what, exactly, Mobile’s citizens were seeing. But after little more than 10 days the creature disappeared, never to be seen again. The reporter said at the time that the fear of witnesses seemed real, although the initial reports would have begun on April Fool’s Day. 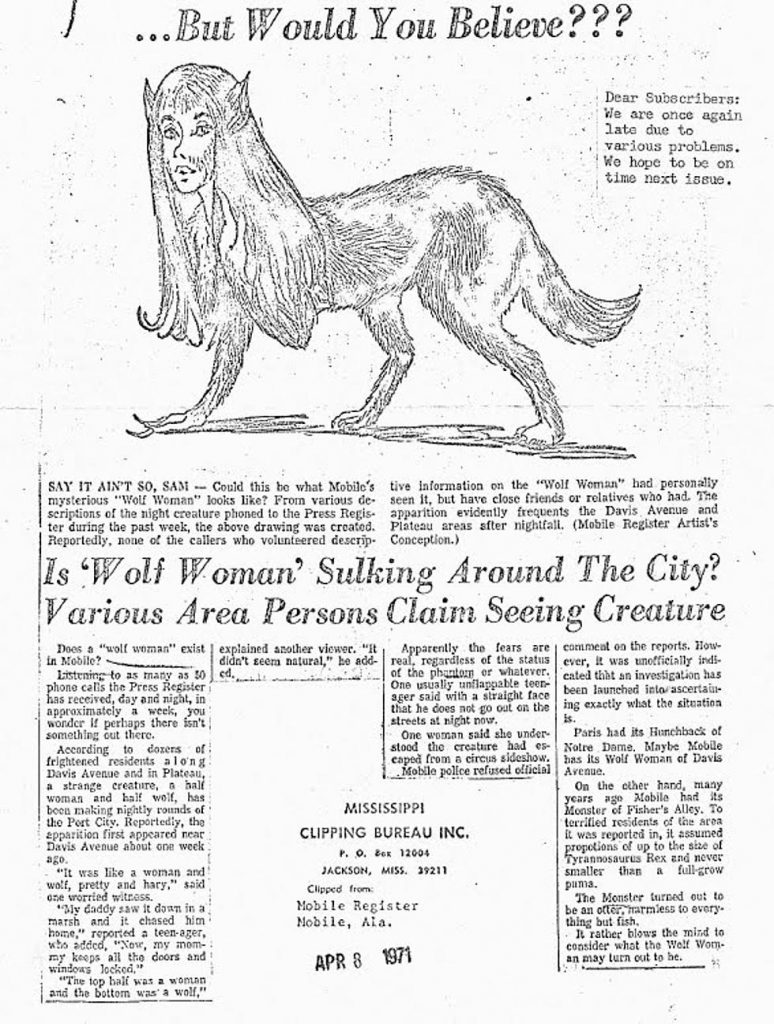 Sightings of half wolf, half human creatures have been reported throughout history, with the werewolf being the most common incarnation.

Since the dawn of civilisation legends of half human, half animal creatures have tantalised the curious and helped build mythologies. The Werewolf is one of the more popular of these anthropomorphic creatures and familiar to use because they have roots in both European and Native American folklore.

The European tradition is the more familiar strain of the legend concerning the transforming wolf/human. In the Native American culture the werewolf is associated with the skin walker. The skin walker can transform him or herself into an animal for a period of time.

Like in the European lore, this person uses evil or culturally offensive means to gain the ability to transform, and they cause chaos and violence in the community while transformed.

Perhaps the original writers of the story Mobile Wolf woman got it right. In the article pictured above the author calls the creature an ‘apparition’ and ‘phantom’… Or was it a feral woman brought up by Wolves? Whatever the truth of the story, something caused quite a stir in Mobile Alabama in the first 2 weeks of April 1971… And then, the Wolf Woman disappeared, never to be seen again.