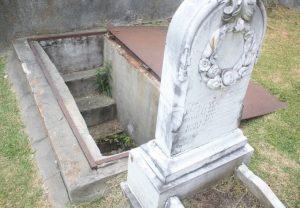 Little Florence Irene Ford was terrified of storms during her short life and would always flee to her the arms of her mother for comfort, and it is said that whenever there was a storm they would go down into their little cellar until the thunderstorm had passed, such was the level of the little girls fear.

When Florence died at the age of 10 from yellow fever on October 30, 1871, her grief stricken mother had this unique tombstone designed for her daughter.

The grave was dug to provide an area, the same depth of the coffin, behind the tombstone where her daughters head lay, but this area had steps that would allow the mother to go down to the same level as her daughter’s coffin, and also had a glass window constructed above her daughters head, so she could look upon and comfort Florence during storms.

Hinged metal trap doors were installed over the area the mother occupied during storms to provide shelter for her whilst she was at her daughters grave. The trap doors that cover the stairway that Florence’s mother used can still be opened to this day.

In the mid 1950s a concrete wall was erected at the bottom of the stairway covering the glass window of Florence’s coffin to prevent vandalism.

This unique tombstone can be located at the Natchez City Cemetery, Adams County in Mississippi, USA.