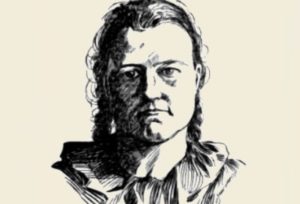 Meet the Rose family: father David, mother Rebecca, brother Walter and daughter Ceely. During the late 1800s Papa Rose ran a successful gristmill business that provided a comfortable home for his family in a bucolic area outside of Mansfield known as Pleasant Valley.

However, giving a happy name to a peaceful rural setting is just asking for trouble. Guess what? This story supports that suspicion.

The darkness that would descend upon the Rose family arrived in the form of an unassuming bundle of joy named Ceely on March 13, 1873. By this time the Rose parents were in their 40’s – way past the time period’s common birthing age.

As their daughter grew it became clear that her body was outpacing her mind and they undoubtedly blamed her disabilities on the late birth.

At school Ceely’s developmental problems kept her several years behind other children in her age group and, despite being much younger, her classmates would berate her by shouting “Dumbell Ceely! Ugly old Ceely!” Thankfully, Ceely’s life wasn’t always as grim as the schoolroom.

Though she was constantly harassed by the community, her family loved and supported her and she had the friendship of two neighbor girls, Cora and Tracey Davis, and a neighbor boy, Guy Berry.

As Ceely Rose began to bud, her friendship and interest in Guy Berry transformed into a powerful infatuation. Unable to keep her eyes off the strapping young man, Ceely would spend hours in her room watching as Guy worked the surrounding fields.

She would constantly interrupt his work with obsessive visits and began to profess that she and Guy were getting married and she didn’t care who knew it! For awhile it was all “Guy this and Guy that” around the Rose home. I don’t know how they stood it.

Eventually, in the summer of 1896, good hearted Guy had enough of Ceely’s fantasies and, in hopes of letting her down easy, told her that neither of their parents approved of her marriage plans and it could, therefore, never be. Boy oh boy did that prickle Ceely’s feathers!

The next morning Ceely marched to the springhouse, grabbed a box of “Rough on Rats!” brand rat poison and mixed two heaping spoonfuls into the mornings breakfast of cottage cheese and coffee.

Her father was dead by nightfall, her brother lasted for several days and her mother slowly began to recover as she had a lite breakfast that morning.

After a few days Mrs. Rose came to the realization that her daughter was responsible for the poisoning and, in an act of Christian forgiveness rarely seen, began to plot to save her child from justice.

Obviously not too bright herself, Mrs. Rose concocted an ill conceived plan for her and her daughter to go on the lamb – far away from the boy that Ceely had killed her own father and brother to be near.

Ceely mulled this idea over for awhile then went out to the springhouse, mixed another giant helping of “Rough on Rats!” into a bowl of milk and bread and fed it to her nearly recovered mother.

Chillingly, Ceely later confessed to being amazed at how well the poison worked and how she laughed uncontrollably as her mother “vomited up the green stuff”.

Now that her family was finally out of the way Ceely baked a cherry pie with arsenic sauce for Guy’s family. She instructed Guy to give his parents the pie but warned him not have any himself.

When Ceely left, Guy made the wise decision to throw the pie into the yard. Within a few hours all the chickens were dead.

Even though her plan to kill Guy’s parents failed, Ceely was on a roll and hated to see good arsenic go to waste so she invited a local minister to dinner with plans to serve him one of the poisoned chickens.

The minister arrived for a chicken dinner but cheated death by carrying on his way when Ceely didn’t promptly answer the door.

At this point it was obvious to most that Ceely was behind the murder of her entire family and a sizeable flock of chickens, but 1896 was an off year for the forensics team of Pleasant Valley and there was no way for the authorities to pin a rap on “dumbell Ceely”.

Finally, her neighbor friend, Tracey Davis, talked Ceely into confessing her crimes whilst the sheriff hid and listened in an adjacent room and the mad poisoner was taken to jail.

Ceely’s trial was quick. She was found mentally unsound and locked up in the Toledo Insane Asylum that autumn, where she remained until being transferred to the Lima Asylum in 1915. At age 58 Ceely died and was buried on the hospital grounds.

Today both the Rose and Berry farmhouses are part of Malabar Farm State Park, along with the home of 7Pulitzer Prize-winning author, Louis Bromfield. (Bromfield’s house also has a ghost or two but that is a story for another time.)

As determined as she was in life, Ceely is said to continue to fixate on Guy from beyond the grave. She is seen peering from her bedroom window out onto the fields where Guy once toiled, wandering the grounds surrounding the houses and haunting the cemetery where her murdered family and beloved Guy are buried.

While the Rose house is only open to the public during the park’s monthly ghost tours, several park rangers have reported run-ins with phantom footsteps, unexplained chills and the wisps of a female figure while visiting the home.

Guests at the Berry house (which is now a hostel) have reported a variety of experiences like full bodied apparitions, voices, objects being tossed from shelves and, most intruigingly, having their feet tickled at night.

If only Ceely’s situation were set in modern times. The tootsie tickler could have forgotten all about Guy and started a booming website catering to a specific subset of the population.

Another area of Malabar graced by Ceely’s presence is the main barn at the Bromfield house. In 2002 a local playwright, Mark Jordan, received permission to perform a play about the Rose murders here, just spitting distance from where they occurred.

In the beginning, the production was plagued with odd electrical and mechanical malfunctions. During particular scenes that recreated the murders lights would pulse and flash violently, audio equipment would fail to work and unexplained drafts would accompany unchoreographed prop activations.

After awhile Mark, a skeptic, began asking for Ceely’s blessing at the beginning of each performance. Since adopting this practice the annual productions went off without a hitch, though they’ve since been abandoned for an immersive “Ceely Experience”. If you would like to go looking for Ceely and check out their October events visit www.malabarfarm.org.