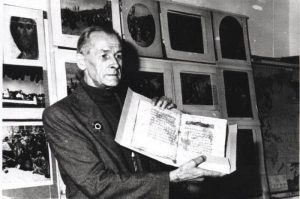 “In the city of Zhirnovsk, Volgograd region, Russia for many years lived a man who died … two centuries before his birth”

In 1985, Yevgeny arrives in Moscow to meet with Vadim Chernobrov, now a well-known researcher of paranormal phenomena. Only for him Yevgeny decided to tell his secret: he is from the future.

Vadim clearly remembers the first words to him: “I am from the 23rd century.”

In support of his words, Yevgeny told Vadim about the collapse of the USSR, about President Yeltsin, about the war in Yugoslavia. Back then Vadim doubted in man words, but now, when everything has come true, there is no doubt left – it was a guest from the future.

He also said that he was a teenager when he got into our time and he did not study history well, so he cannot tell a lot.

Yevgeny’s story about his journey

In the twenty-third century, when he was 13 years old, Yevgeny decided to make an impression on the girl he likes and took her to ride a stolen time machine. Unfortunately, in the 30s of the twentieth century, the time machine crashed. The teenagers were understanding that the machine would only be able to return one person back, so Yevgeny gave way to a place for a girl.

She should have returned with help but help never came. He hoped for help, because he knew what awaited the USSR in that time. A young boy was adopted by good people and he started a new life.

When the war began, Eugene accurately named the date of its end. After the war, Yevgeny created and headed the museum of local lore, from 1970–1980s in one of the halls of the museum hung a very long “Tape of Time” – a multimeter paper scroll depicting the main events of world history – from stone to the XXI century!

Yevgeny wrote poems about mobile communications and the Internet. Back then, even visionaries did not take these things seriously.

Yevgeny Iosifovich died in 1991 at the age of 76, having passed away two centuries before his birth.

First, it is reported that St. Petersburg will be urgently evacuated due to flooding.

Secondly, it is said that Zhirnovsk in the 23rd century is a spaceport, from where they are sent on time trips and this explains why he was chosen to live by Yevgeny.

Watch Your Language: Using Positive Words For A Better Life